Battling the elements on a bike while riding Antarctica’s frozen landscape isn’t everyone’s cup of tea. Neither is spending four months riding the backcountry from Cairo, Egypt, along the backbone of Africa to Cape Town, South Africa. Yet there are bike adventurers who take on these and other extreme challenges offered by Henry Gold and his bicycle tour company, TDA Global Cycling. 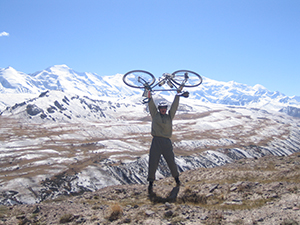 The latest in this pantheon of intense experiences is a three week excursion from Antarctica’s 89th parallel to the true South Pole. The trip starts when “Our people fly from the southern tip of South America to base camp in Antarctica,” Gold explains. After spending a day or so getting used to the altitude, participants board another plane for the 89th parallel, and “from there, the bike ride is about 170 miles to the South Pole.”

This sounds so simple and relatively easy although the success of the tour depends on the weather, of course, and to a certain extent, the attitude of the participants. Gold expects the actual ride to take around seven to 10 days. Once they finish their tour, the participants board a plane and fly back to South America.

It’s between the flight to Antarctica and back to South America that the participants are tested by the weather, the conditions, and their willingness to work together as a team. “Our people [the participants], carry their own gear on the tour,” a significant difference from the offerings of other bike tour companies.

Participants also are expected to work through issues that might come up during the course of a day of riding in extreme conditions. The challenge as Gold sees it, isn’t necessarily in the riding; it’s when “they have to change a tire and can’t take their gloves off to do so. Their minds have to be tough.

“The right attitude is important,” he observes with no little understatement. “It [the tour] is no picnic.” The group shares tents while on the road to the South Pole. They also do their own cooking and cleaning up.

For people interested in pushing themselves in this most challenging of terrains, Gold has a couple of recommendations:

at bike. The stable frame and wide, beefy tires are entirely appropriate for this endeavor.

Learn to ride it in sandy and muddy conditions. This trip won’t be on paved roads, so learning to ride difficult terrain is key. “It’s the people who have the right technique,” who are successful, Gold said, “Not necessarily the strongest riders.”

Attend TDA Global Cycling’s training camp. This event takes place at Lake Winnipeg in Canada for six days in February, 2016, and mimics the conditions what people can expect in Antarctica.