The California Coast Classic bike event benefits the Arthritis Foundation by raising funds needed to find a cure for arthritis. The route goes from San Francisco to Los Angeles on the Highway 1 coastal route over eight days.

The experience of doing a group ride, working toward a common goal (doing a long distance ride and raising money for a charity), facilitated their meeting and getting to know each other, although, Annie says, "It's hard to remember the exact moment Troy and I actually met. But it's safe to say we talked or rode together or hung out a little every day after Day 5 of the 2009 event."

That year, on Day 8 Troy said, "Dude, I had a dream last night--" and he told Annie he dreamt he asked her to marry him. This was on the last day of the tour and, Annie says, somewhat awkward because her ex-husband was at the campsite to drive her back home after the Coast Classic finish.

On their way back to the Bay Area in their respective cars, Troy and Annie saw each other riding home from the tour on the I-5 North. "I recognized his yellow Trek bike on the back of the SUV."

For his part, "Dude, that's her!" Troy said to his friends in their SUV.

Love and a proposal

Unlike two ships that pass in the night, they met up next year and the next… and in 2013, Troy proposed on Day 1 of the 2013 Coast Classic, at the Pigeon Point Lighthouse in Pescadero before the group ride into Santa Cruz.

There is a story behind the proposal as well: "Initially my plan was to propose on the Golden Gate Bridge (because of Annie's love for bridges)," Troy said, but things didn’t turn out. "The opening ceremony for the Coast Classic ran long that year, and the Bridge was not on the Daily Route Guide." If they rode up to San Francisco, that would add miles to their ride just to get there and back to the event start.

"Annie was way stressed out about making sure there would be plenty of time to do the ride, since Day 1 is roughly a 90 mile day.

When he asked her, "Please, let's go," Annie flat-out said, "No. I'm not doing the Golden Gate this year."

"She told me I could go and take pictures and do whatever I wanted to do and she'd meet up with us later. Totally messed up my plans!" he continued, good-naturedly.

Annie picks up the story: “The end result is much better. Pigeon Point Lighthouse has special meaning for us," and that's where he was finally able to formally ask for her hand in marriage. 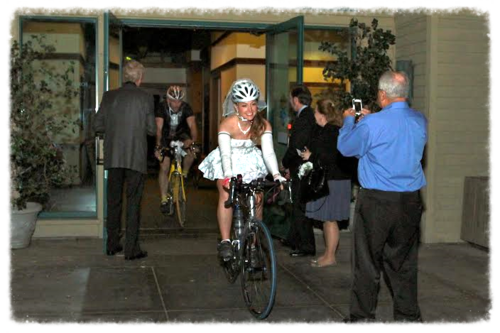 Because bicycling brought them together, their wedding celebrated riding and their experience together. The invitations, place cards and thank you cards came from bicyclepaperdesigns.com. Instead of a guest book, they bought two classic bike rims and had the guests write advice cards and clothespin them on the rims. Their reception gift to their guests were bicycle bells.

The cake looked like the two of them on top of Mt. Hamilton. They found bride and groom wire wedding cake toppers that were on road bikes personalized with their names by Heather Boyd.

"Lastly and most importantly, we included pictures and stories of our biking experience as much as possible!" said Annie.

The story doesn’t end there. Learn how this couple approaches training for their big bike event in the upcoming issue of Cycle California! Magazine.

What a cute story! I love the photo of them in their wedding outfits, on their bicycles. And, so sweet, to have the whole wedding themed to celebrate how they met. Thanks so much for sharing!