The bike is an amazing tool and nearly every garage in America has one. But it’s as a tool for exploration where the bike really shines. As a way of extending your reach, bikes and transit offer a great approach to adventuring out. Let’s take a look at this idea further.

I'm a former bike and train commuter. I used my bike and Caltrain’s peninsula service to ride to work when I worked out of the house. It was a practical approach to a 30 mile commute: I rode a mile to the station, hopped on the train with my bike, took the train the 25 miles to the nearest station to my job, hopped off and rode the last four-and-a-half miles on my bike. Easy peasy! 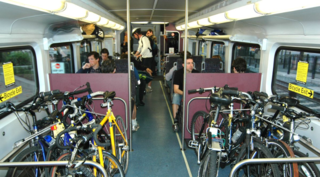 Taking a bike on transit is easy

But, what about the bike and transit for exploration, rather than day in, day out commuting?

Across the Golden Gate

From my home in the South Bay, I could take Caltrain all the way into San Francisco. Then, I’d get off and ride through town to the Golden Gate Bridge, rolling across that iconic structure into Sausalito in Marin County for lunch.

Sausalito sits on the San Francisco Bay and has a cute little downtown, just right for exploring. Once I was done, I’d ride back the way I came, back to the train and home.

Total mileage for the trip is 124 miles or so.

I could also take the Amtrak train Capitol Corridor from my home to Davis, that hotbed of bicycling culture! The train has a stop in Davis, 106 miles from San Jose.

Davis is a jumping off point to really fun riding such as out to Winters or into Sacramento. While in Winters, I could go wine or cheese tasting, maybe have a meal and an espresso at that gathering place for bicyclists, Steady Eddy's, or just sit in the park and contemplate the 19th century architecture of Winters' downtown. 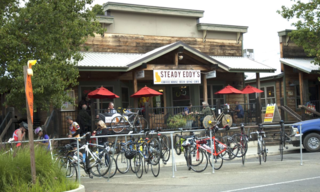 If I really wanted to extend my reach, I'd take Amtrak into Sacramento! From Amtrak, I’d hop off with my bike and ride the two-and-a-half miles to the Sacramento Regional Transit light rail station, get on and ride into Folsom, that historic town with the prison east of Sacramento. Or, to add more mileage, I'd ride the paved 26 miles along the American River Bike Path to Folsom. See? Possibilities!

How do you use your bike to explore?