This week, Found by Bike took a different approach to exploration. We didn’t go to exotic Marin County or explore a local park. We decided to take our bikes through San José’s last remaining heritage warehouse district. Why? Because we were in search of locally produced beer. 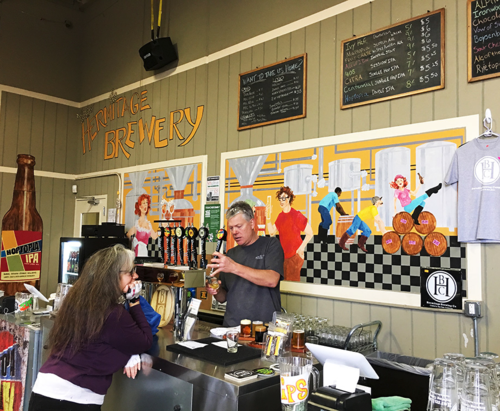 Urban taprooms have been a trend for quite awhile, and San José has her share of them. Because the three taprooms that comprise the San José Small Brewers Association are within a mile or so from each other, we thought a pub crawl by bike through some of the city’s best small breweries would be in order. These three taprooms are located just south of downtown.

We saddled up our two-wheeled steeds and rolled along streets before the rush hour traffic took over. For a $20 tasting fee, we sampled the wares from Hermitage Brewing Company, Santa Clara Valley Brewing, and Strike Brewing Company.

I used to think that the area between Monterey Highway and 10th St. along Alma St. was a bit of a no-man's land for bikes. I treated it as a place to ride through to get to the county parks to the south of the city. The area is heavily industrial with remnants of railroad tracks criss-crossing the streets. While Alma St. has a bike lane that comes and goes, two of the streets where the taprooms are located have upgraded bike lanes. Finding bike parking was sketchy: Two of the places had bike racks and the third we ended up locking our bikes to a fence next to the building.

From our home we headed up Alma St. to our first stop, Santa Clara Valley Brewing. Located at 101 E. Alma Ave., the airy taproom has brew named for some aspect of Santa Clara Valley history. For example, Electric Tower IPA is named after the tower that lit San José's night sky from 1881 to 1915. Another beer, the Peralta Porter, honors the 200-year-old Peralta adobe once owned by one of the original land grant holders of Pueblo San José, Luís Mariá Peralta. Then there is the New Almaden Red, so named for the resemblance in color to the ore from the cinnabar mines in the New Almaden area of San José.

We finished our samples, unlocked our bikes, rolled up to 7th St. and made a right to our next destination: Hermitage Brewery, at 1627 S. 7th St. This one is located at the end of a long driveway in the middle of the block. We over-shot the driveway, then asked the security guard at the marijuana dispensary at the end of the block for directions. He kindly pointed back in the direction we'd come and we pedaled down the driveway toward a grain silo that most folks use as a reference point to the warehouse door.

Hermitage’s taproom has really chatty, knowledgeable servers. The offerings include beers they produce year-around such as Citra, Ale of the Imp, Ale of the 2 Tun, and a few others. Hermitage also has beers that have been barrel and wood-aged, which gives those beers a slightly more complex taste profile. We sat, savoring our two-ounce samples, enjoying the classic rock pouring out of the sound system just as the sounds of beer-making and bottling poured out the back end of the warehouse. 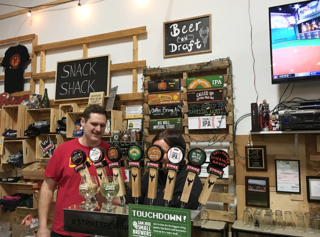 Following our tasting at Hermitage, we took off for our last stop of the afternoon: Strike Brewing Company. This one was the furthest out from our home (in retrospect, we should have started with this one and worked our way back toward home). Located at 2099 S 10th St #30, Strike Brewing is all about baseball, from its Colossus of Clout Irish Style Red Ale to the Horn Rounder IPA, the Called Up Extra Pale IPA and the Screwball Blonde Ale. Unlike Hermitage, these folks have TV monitors, which during baseball season, are tuned to the games.