In the ongoing quest to explore places local to our Bay Area home, we visited Cascade Canyon Open Space Preserve in Marin County. We chose this park because we had to be in Marin for a family gathering. Also known as the birthplace of mountain biking, the magic of Marin county is in its many natural wonders: the Marin Headlands, Mount Tamalpais, Tomales Bay, acres and acres of parks, tiny historic coastside towns, organic farms and agriculture, hills, quiet roads, busy roads, trails immortalized in the annals of mountain bike history. 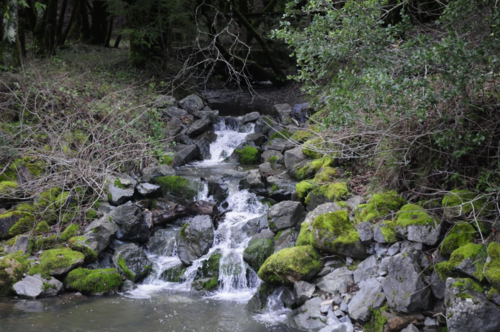 Water pool at the side of Cascade Fire Road

We've visited the area in the past, but haven’t spent much time there, so we decided to find a park with a waterfall that wouldn't take all day to get to. We had to be presentable at a nice dinner that evening, so we packed a change of clothes and our hiking shoes and mapped our walk to Cascade Falls outside the town of Fairfax.

Unless you are coming from the north, Marin County is only accessible by bridges: Golden Gate Bridge from the south or the Richmond/San Rafael Bridge from the east. We came up from the south, so it was the Golden Gate for us. Arriving in Fairfax just in time for lunch, we tucked into sandwiches and pints of IPA at  Iron Springs Pub & Brewery, not too far from our destination of Cascade Canyon.

Although the pub was comfortable and we could have spent the afternoon over a pitcher of Casey Jones Imperial IPA, we traveled along progressively narrower neighborhood streets off Bolinas Fairfax Rd. until we came to the park’s trailhead at Elliott Nature Preserve.

There is no parking lot, so we parked on the street in between driveways. Getting there by bike would have been easier; it's a short distance from Fairfax's downtown area, and we wouldn’t have had to deal with finding a space in a neighborhood with limited parking.

Wondering what the situation would be like during the summer, we guessed from the number of signs that read "No Parking," or "Don't park here -- you will be towed" that during the spring this would be a better weekday trip rather than a weekender.

Once on the damp and muddy High Water Trail, we found that Cascade Canyon Open Space Preserve does allow mountain bikes on the fireroad trails that link up to the Tamalpais Watershed lands. From the High Water Trail, we went left onto Cascade Fire Road, and wandered up a very steep hill, crossing into the watershed lands. After about 45 minutes of steep walking, we decided we had had enough and headed back down the mountain to get to the Cascade Falls Trail and the waterfall. 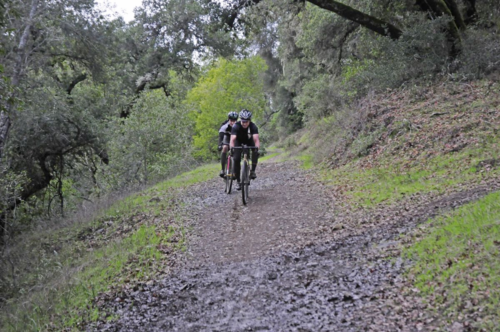 You can't use a bike to get to the falls. You have to park it at the trailhead at the park entrance, as the High Water Trail that follows San Anselmo Creek has drop-offs and is very narrow in a few places.

Back down the hill from Tamalpais Watershed, we crossed a little bridge where the San Anselmo and Cascade Creeks meet, and within about 12 minutes, arrived at the object of our desire: Cascade Falls. At about 20 feet high, no one would ever mistake it for Yosemite’s Bridal Veil, but for the water-starved Bay Area, these falls are pretty special.

There is a little observation deck from which you can look at the top of the falls. It was very slippery with mud and can only accommodate about five adults max, so I stayed and looked at the water head-on. The trail continues up the hill alongside the creek, but that was for another day. We had a party to get to. 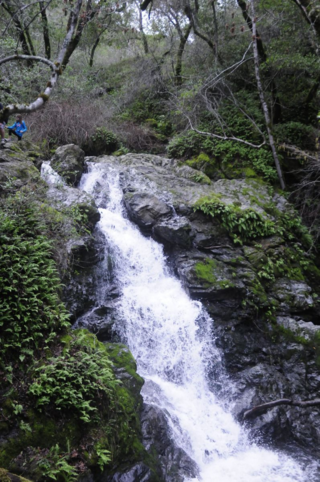 Object of our desire: Cascade Falls!

Make it a day. Get there early in the day and you can park closer to the trailhead. Fairfax is just around the corner, and there are lots of places to sit down and savor a meal or grab something and go: Good Earth Market, Iron Springs Pub & Brewery, the Barefoot Café, among many others.

Cascade Canyon Open Space Preserve is located west of Fairfax at the end of Cascade Dr. To get there, take Sir Francis Drake Blvd. to Fairfax and turn left into downtown Fairfax and onto Bolinas Fairfax Rd. Follow this until you see Cascade Dr., where you'll turn right. The trailhead is at the end of the road. The best time to see the falls in all their glory is in the winter, followed by springtime.