On the coast: What’s in Santa Cruz?

When I'm feeling closed in on all sides I head to the coast. I don't especially like crowds, so I get away midday on a work day. Only 20 minutes from San José via Highway 17, the coast along Santa Cruz is a great resource for outdoor enthusiasts: There's beaches, off-road trails to ride, trails to hike, bike paths, a boardwalk, rocks to climb, state parks to explore, beaches to lie around on. And, a few places to eat and drink.

My destination for the day was Waddell Creek Beach, the northern-most state beach in Santa Cruz County. It is a part of Big Basin Redwoods State Park, located on the side of the park allows mountain bikers on the Skyline to the Sea Trail. The beach itself is a great place to windsurf or kiteboard or just watch the action, if you're so inclined. 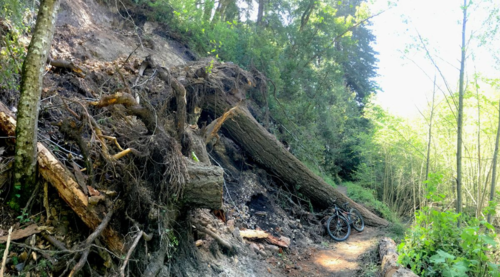 After rollercoastering over Highway 17 and making my turn north onto Highway 1 through Santa Cruz's mosh pit traffic jam, my mountain bike and I headed north toward Davenport, about 9 miles from Santa Cruz. The beach is about 8 miles past Davenport. On the way, I passed Wilder Ranch State Park, a very popular destination for mountain bikers and their families. With about 35 miles of mountain biking, hiking, and equestrian trails, riding at Wilder Ranch is a great way to introduce your little ones to trail riding.

I chose Waddell Creek because I wanted to see what I consider a less popular side of Big Basin Redwoods State Park. The day was windy, very, very sunny, but I knew that once I got onto the trail that headed east into Big Basin’s forested slopes, I wouldn’t be seeing much sun. As of March 30, 2016, the most of trails are closed due to downed trees and damage from the recent El Niño storms. I decided to try my bike out on the portion of the Skyline to the Sea trail that is open. I wanted to practice riding my newer mountain bike. An easy ride on wide trails would be a good thing for me while I got used to the gearing and bigger 27.5 inch wheels.

I parked in the small parking lot at the beach, across Highway 1 from the Rancho del Osos gate for Big Basin Redwoods State Park. I imagine the parking lot is full on the weekends and that the surfers, hikers and bikers crowd on the side of the highway to the north and south of the entrances. I hauled my bike out of the truck bed, rolled to the end of the parking lot, waited for a break in the north-south traffic, and headed through the gate across the road.

Skyline to the Sea Trail 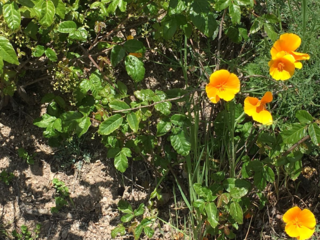 The trail begins at the end of another parking lot that is used for equestrian trailers. To the right is a working farm with gates that open onto the hard-packed trail. The buzzing of a weed-wacker and calls from birds I couldn’t see accompanied me as I plunged deeper into the tree canopy. The trickling sounds of Waddell Creek began to drown out the weed-wackers and I eased into the rhythm of peddling a rocky, rooty, ever-narrowing uphill trail. My ride, although fairly short, gave me the breathing space I needed to clear my head.

Back to the beach

After getting back to the truck, I sat on one of the granite boulders at the edge of the parking lot and watched a lone kiteboarder dance above the waves. I would have sat there for hours if my stomach hadn’t reminded me that breakfast was a long time gone. I locked my bike into the bed of the truck and returned to Santa Cruz in search of a sandwich. My quest brought me to Santa Cruz’s West End neighborhood, a slightly less touristy destination than the Boardwalk and downtown.

We discovered the Swift Street Courtyard recently, when we were in the area for the Bell Joy Launch party. The courtyard is a cluster of former warehouses with an assortment of wine tasting rooms, restaurants and shops. There are two tap rooms for local beer, Santa Cruz Mountain Brewery and West End Tap Room & Kitchen. Kelly's French Bakery and el Salchichero, a sustainable-practice butcher shop round out the places to eat. The West End area also houses 13 wine tasting rooms within a three-block radius.

I grabbed a gruyere, gorgonzola and apple pannini on sourdough and a table indoors at Kelly’s bakery. The wind off the ocean had increased to galeforce, making Kelly’s sun-drenched patio not an option. A hot sandwich took the edge off. The warm and creamy cheese, combined with the crunchy slightly sour apple slices helped satisfy my hunger and set me up for the ride back to San José.