There's Something about Buellton

We usually attend the Solvang Century as sponsors with Cycle California! Magazine and our booth filled with bike event fliers. This year we decided to stay in Buellton because, as I learned during a CVB-sponsored trip to the area last summer, it is more than Andersen's Pea Soup restaurant. 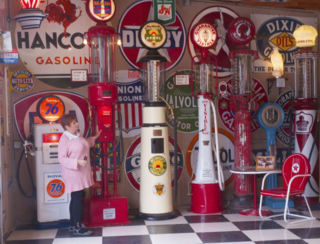 Vickie Mendenhall next to the first self-serve gas pump

While Solvang reigns over the tourist draw (where else would you find an early 20th Century Danish town in the middle of a premier wine region?), Buellton is finding its way as a tourist destination for people who want to see something a little different from what Solvang has to offer. In fact, there are several reasons to check out the town, in addition to the great road bike riding that has everyone from Euro Pros to tour companies coming out with their bicycles.

This post is Part II of our Santa Ynez Valley series that started last week with That First Event: Solvang Century.

For our one day off, I made an appointment for a tour of Mendenhall's Museum of Gasoline & Petroliana, located at 24 Zaca St. This was a truly different experience: A two-hour walk through a history of America’s love affair with the automobile. 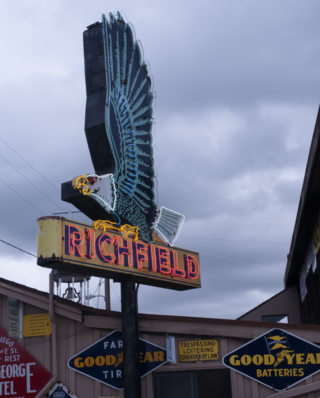 The eagle symbol of Richfield, which became Atlantic Richfield, known today as ARCO

The genesis of the museum began with Jack Mendenhall, who before becoming a traveling salesman in the 1970s, owned a gas station in Buellton in the 1950s. As he traveled around the U.S. for his work, he collected: Tin signs, porcelain signs, directional signs, glass globes that adorned the tops of old gas pumps, old gas pumps themselves, old cars, anything that appealed to him.

The museum is the ongoing project of Jack's son, Mark, and his wife, Vickie. It is at the site of a former gas station and wrecking yard, as well an old church in the same block. As the collection has grown Mark's experience as a general contractor came in handy: He built the outbuildings that houses all the displays.

When Jack started collecting in earnest, the signs that now cover every available wall of the museum weren’t worth much. Most of these signs were tossed in the trash when the company changed logos or names.

Today, many of the signs that adorn the walls still have beautiful colors and are as vibrant as when they were gracing the side of a gas station. “Those are the porcelain signs,” explained Vickie. Newer signs were made of aluminum, which fades over time. The porcelain signs have become much more valuable to collectors as time has gone on.

The museum also houses the Dry Lakes Racing Hall of Fame. Both Jack and Mark participated in land speed racing on the dry lake 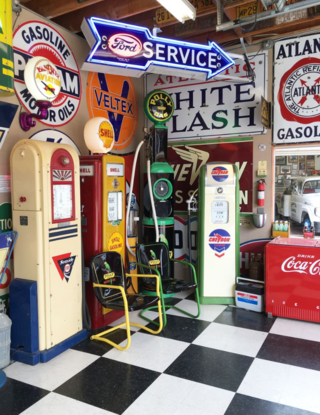 beds of Utah's Bonneville Salt Flats and Southern California's El Mirage. Jack became a lifetime member of the 200 MPH Club in 1991 when he broke the land speed record with a speed of 207.015 MPH. Mark took on the same challenge and in 1996 drove the same car to a speed of 210.114 MPH. Exhibited in glass cases are photos of the aerodynamic cars used to break the records as well as scenes from the races.

The tour's charm is history made personal. For while it is the Mendenhall family's personal history, it's also a shrine to a time when there was beauty in roadside and neon-lit gas signs, when gas companies used prizes and promotional items to entice people to spend money on their gas and products. www.mendenhallmuseum.com

Over the years we've experienced the area, the town has gone beyond the Santa Maria-style barbecue steak houses to venture into farm-to-table and locavore-type dining. One of these is
Terravant Winery Restaurant, 35 Industrial Way. Terravant has tapas-style dining and a massive selection of Central Coast wines and is located in an industrial warehouse. The dining room overlooks the Santa Ynez Mountains, which at this time of year are so, so green. Avantwines.com

This charcuterie at 181 B Industrial Way offers high-end pizza, sandwiches and salads in a very informal atmosphere. People order at the counter and sit at community tables. Industrial Eats' menu also has butcher shop items to go. In a twist on DYI, Industrial Eats and Valley Piggery offers pig butchery workshops that include teaching people to cut the pig, make sausage or chicharrones, or cure hams among other skills. industrialeats.com 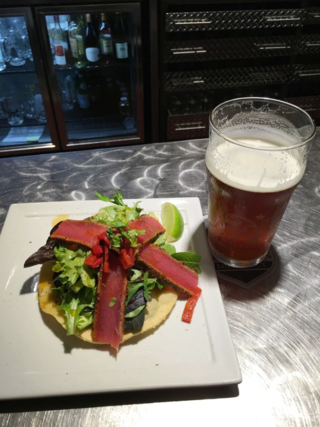 The taproom and barrelworks location is 620 McMurray Rd. The fare is typical California brewpub with a twist: Seared ahi tuna tostadas, burgers, brisket tacos, and the ubiquitous gourmet pizzas. And, of course, there is beer. Some of the brews served in the taproom can’t be purchased anywhere else. www.firestonebeer.com

Down the hill from Solvang this very popular breakfast stop is located at 272 Avenue of the Flags, right around the corner from Mendenhall’s Museum. Ellen's serves Danish pancakes, thinner and crispier versions of the typical American pancakes, and eggs with Danish sausage, in addition to traditional all-American breakfasts. Lunch and dinner offer more standard fare: Sandwiches and home-made soups, while dinner is steak-and-potatoes American: prime rib, filet mignon, New York strip, in addition to items like rack of lamb, chicken, sauteed beef liver. Ellensdanishpancakehouse.com