Because of the Sutter Buttes' small area, they create a unique opportunity for bike riders: How many people in this world can boast about riding their bike around a mountain range in a single day? We thought this would be a splendid topic for Found by Bike. 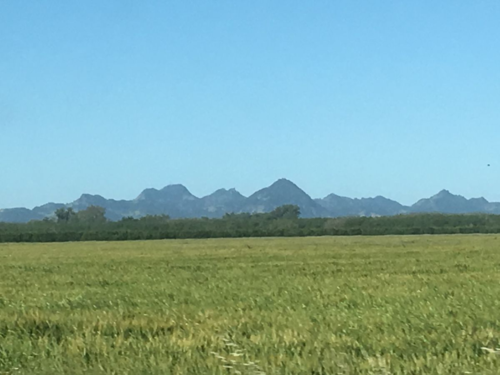 If you look at a map of the topography of the region, the Buttes look like a dot in the middle of the valley. They form an approximate circle, 10 miles from north to south and 10 miles from east to west and cover an area of about 75 square miles. Marshes, rice fields, and wildlife refuges border the buttes to the west and the north, and Yuba City sits about 11 miles to the southeast. The distance around the Buttes is about 45 miles.

Dominating the landscape between Colusa and Yuba City, the Sutter Buttes are the remnants of a volcano that went extinct, scientists believe, about a million years ago. From far away, they look like a mountain range, but in reality, they are a circle of mountains, the tallest rising about 2,122 feet from the valley floor. 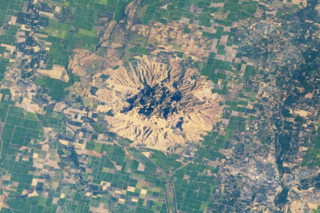 Before levees and dams were built to hold back the rivers, winter storms and spring run-off frequently turned the Sacramento Valley into a shallow inland sea. During these times, the Buttes were a kind of island refuge for the natives who lived in the Sacramento Valley and the wildlife that sustained them.

The Buttes have had many names over the years. The Maidu people called them "Histum Yani," translated as "Middle Mountains of the Valley" or "Spirit Mountain." In 1949 after being known as the Marysville Buttes, they were rechristened as the Sutter Buttes.

Currently, the most of Buttes are privately owned, but that doesn't stop people from taking a scenic bike tour on the county roads around them. Every year there are a couple of bike rides that include routes around the Buttes: Bike Around the Buttes which took place in April and the 3F Century on May 7.

However, a roll around Sutter Buttes doesn’t have to be done during an organized bike ride. There are a series of county roads that bicyclists can ride any time to travel around the Buttes. If you only have time to experience a narrow swath of the Buttes, Pass Rd. goes through the south end of the mountains. The link to the road map around the Buttes is here.

Another way to really experience the Buttes is to sign on to a guided walk, put on by Middle Mountain Interpretive Hikes. These guided walks take place from October to about mid-May, skipping the late spring and summer because of potential fire danger and the fear of rattlesnakes.

The hikes do cost and you have to be used to walking on rough terrain. You must register in advance with Middle Mountain Interpretive Hikes, (sometimes WAY in advance, because these hikes do sell out). To find out more, go to www.middlemountainhikes.org or call (530) 671-6116 and leave a message.

If you're interested in more information about the Sutter Buttes, the Community Memorial Museum of Sutter County, 1333 Butte House Rd., Yuba City has an exhibit about them. This free museum is open Wednesdays through Saturdays.