While in Monterey for the Sea Otter Classic, we took some time to walk the grounds of the Asilomar Conference Center outside Pacific Grove on the Monterey Peninsula. Asilomar houses a cluster of historic buildings designed by the prolific California architect Julia Morgan. It’s a perfect spot to go and tour the buildings in as natural a setting as you can find on the Monterey Peninsula.

The area also offers wonderful springtime riding on the roads around Monterey, with a paved bike path that runs from Castroville through Cannery Row, bike lanes along the roads that pass Asilomar, and 17 Mile Dr., a scenic must-do that takes riders all the way to Carmel.

For real drama, roadies who like a challenge can ride 17 Mile Dr., then hop on to Highway 1 south of Carmel and experience this rolling cliffside road south to Big Sur.

Rolling along the coast

We decided to stop in at Asilomar and have a look-see, drink in the peaceful atmosphere and experience the early 20th century buildings Morgan designed in the First Bay Tradition, a Northern California Arts and Crafts style. The First Bay Tradition emphasizes nature, the site, and and the use of local materials in its buildings.

We followed the coastline along Ocean View Blvd., leaving Monterey’s Cannery Row, drifting along the two and a half miles into Pacific Grove. The sun shone bright and very hot, but the prevailing winds off the water kept the temperature comfortable.

As we made the turn to Asilomar Ave., the sea air gave way to a piney scent as we turned away from the ocean and made our way inland to the Asilomar Conference Center.

Asilomar began life as a summer camp for members of the Young Women’s Christian Association (YWCA) in the early 20th Century, when Phoebe Apperson Hearst suggested that the YWCA ask for a donation of land from the area’s largest landowner. The landowner agreed. The camp is now a conference center owned by the state of California, where groups and individuals can rent rooms surrounded by acres of trees amid the sand dunes.

Because she had a history of working for the YWCA in the San Francisco Bay Area, Morgan was hired to design and pilot the work of putting up buildings on the beachfront property at the western end of the Monterey Peninsula. Her inspiration and the materials for the buildings were taken from the local setting: Pine logs, redwood paneling, granite boulders. Several of her buildings at Asilomar still in use today and open to the public for touring.

Once we got to the main entrance off Asilomar Ave., we wandered in and stopped at the first building we came to, not realizing that our walking tour was supposed to begin in the center of the property, around the circle Morgan designed to be the focal point. 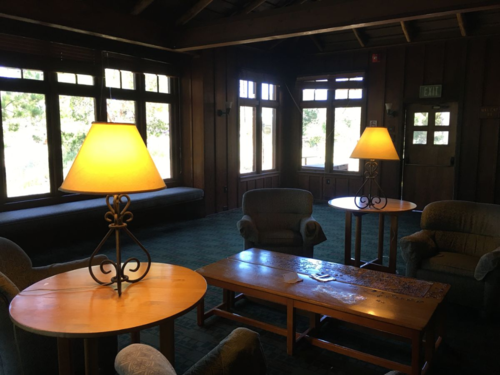 We started our self-guided walk at Stuck Up Inn, which, as I mentioned, was the first building we came to. This building, built in 1913, was the dormitory for the college-bound women who worked for the YWCA. There were requirements for these women: They had to be college-bound high school seniors, active in the YWCA. And, they had to be willing to work.

According to the permanent exhibit in Stuck Up Inn, the first group of young women hired had no idea they were expected to do laundry, sweep the floors or serve meals and they complained. Apparently someone overheard their conversation and remarked, “You’re just a bunch of stuck-ups,” and the moniker stuck. Soon it became an honor to be a Stuck-up, as the women embraced the challenge of showing how hard they could work.

As we walked in from the bright sunshine, we found the Stuck-up Inn’s living room softly lit with the glow of table lamps and the sunlight from outside. The interior living area features rustic touches such as a high ceiling criss-crossed with rough log trusses and unfinished redwood-paneled walls. The brick fireplace, like the fireplaces in most of the other buildings, is centrally located, meant to be the focal point of an area where people could relax and socialize, another detail in Morgan’s First Bay Tradition designs.

While we were there, we found people sitting on the leather couches scattered around the living room, looking at their smart phone screens.

From Stuck-up Inn, we rolled to the first building on the tour: The Social Hall, built in 1913. As one of three buildings on the conference grounds circle, Morgan envisioned the Social Hall to be the center of activity for the conference center. The stone columns are granite and the indoor frieze uses pine logs with the bark left on, in the rustic style that shows off these natural materials. Like most of the buildings at Asilomar, the Social Hall has redwood beams, wooden floors and darkly-stained trim, features of California’s Arts and Crafts architecture.

Walking up to the Dining Hall, we found an exterior covered with granite veneer with wood shingles above the windows. The room inside has bare redwood walls and high, open ceilings with exposed trusses and two fireplaces. As they ate, the diners could look out of the tall casement windows to see and experience the natural beauty of Asilomar’s dunes and forest, another hallmark of the Arts and Crafts movement. 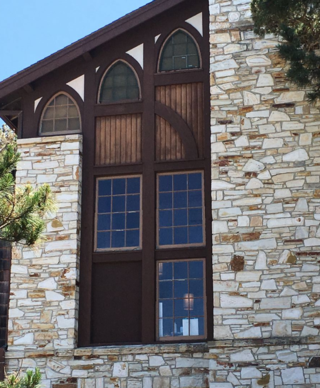 The Recreation Auditorium, built in 1928, was the last Morgan designed building constructed on the grounds. The majestic soaring building features redwood shingles and arched windows at the ridge and clerestory. The exterior facade features Carmel flagstone.

A Pirate’s Life for Me!

As with Stuck-Up Inn, the Pirates’ Den has a unique story to tell. This building was the dormitory for the high school and college-aged men who did the physical labor around Asilomar.

The Pirates outfitted their rig with a mast and flag, signifying to one and all who was in charge of the Pirates’ Den. Over time they added a sea chest and a ship’s clock to the furnishings, giving their den a proper Pirate vibe. Of course, a Pirate’s life wasn’t all fun and games: In addition to working as mechanics, bus boys, dishwashers and bell boys, they also did general maintenance work on the buildings and grounds. The Pirates also worked alongside the Stuck-ups in the dining hall.

Once the work was done, they organized barbecues on the beach with the Stuck Ups and played sports. At least a couple of times a summer they would play baseball against the Stuck Ups to the enthusiastic cheering of crowds from nearby Pacific Grove.

Make it a day!

As I mentioned, the ride to Asilomar is easy. You can make it a day: Ride there, have a meal at the restaurant or cafés that are open to the public, explore the grounds and make it part of a wonderful Monterey Bay experience. Find more information at parks.ca.gov/Asilomar or visitasilomar.com

That's a tough one, Milo. Have you tried searching for vintage bikes and seeing what pops up? Good luck!

Hello,
I am looking to find the old style bikes they used to rent at Asilomar. I would like to buy one if I can find it. Any help would be appreciated.