In the mid-1990s, way before the lure of bike magazine publishing called us, we promoted a series of track races on Friday nights at the Hellyer Park Velodrome in San José, California. The weekly series drew racers from all corners of Northern California for those really competitive races. They also drew spectators who mostly were friends and family members of the racers. People came out with their picnic dinners to watch enthusiastic racing for a couple of hours every Friday.

Although that was a long time ago, the Hellyer Park Velodrome has survived and thrived and each week, the association that runs it in partnership with the County of Santa Clara, offers programs for novice and experienced racers, opportunities for complete newbies to learn how to ride track, and racing on Wednesday and Friday nights. The mission of the Northern California Velodrome Association is to make training and racing opportunities affordable for cyclists, families, and the local community.

The group receives minimal funding from its activities, which are used for the upkeep, maintenance and improvement of the velodrome. 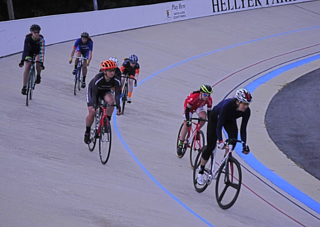 We thought we’d take a short trek to Hellyer County Park and check in with the velodrome racing.

After an hour or so of warmups in which the evening’s competitors rode several laps around the track, the juniors were the first field of the competition. Racing is divided into categories. Wednesday’s categories were Juniors (boys and one girl), Cat 5 Men, Women, Cat 3-4 Men, then the Cat 1-2-3 Men, the most experienced group of racers.

Like all the track races that night, the competitors started at the top of the track, holding onto the railing. As the race official gives the start signal, they glide down toward the bottom of the track in a slow roll-out before the group picks up speed and slings itself around the second turn. All the categories started with scratch races. These events are a mass start and the objective for the racer is to be the first over the finish line after a designated number of laps.

You and the Devil race

One of my favorite races to watch is the Miss and Out, otherwise known as an “elimination” race or the Devil Takes the Hindmost. The length of the race is determined by the number of the riders in the race. After a designated number of laps (on Wednesday night, it was three), on the next lap, the last rider in the bunch to cross the start/finish line is pulled from the track. The race ends when the last two racers sprint to the finish. It’s a kind of high-speed musical chairs. 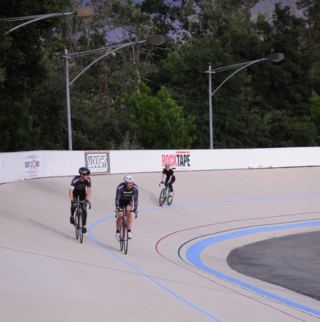 Why come out to Hellyer Park Velodrome?

For spectators: Great opportunity for watching exciting race action: The racers ride around a bowl right in front of you. You can see all the action.

For families: As the weather gets warmer, the days longer, they are perfect to take a picnic dinner in the stands and watch the racing.

For the racers: Crowds of people to cheer you on as you sprint for all you’re worth to cross the finish line first.

For the spectators: A chance to learn about the racing they will be watching at the Rio Olympics this summer, without the travel worries!

For the families: A chance to get to know the racers. Who knows? There might be a budding Olympic gold medalist in the bunch!

For the racers: The social fun of racing in a supportive environment.

For everyone: The opportunity to support a grassroots nonprofit, the Northern California Velodrome Association. This small organization runs the races and educational programs. It also maintains the rental track bikes for anyone who wants to learn how to ride on the track. They run clinics and mentor the racers. In short, the association does it all for love, not money. Check it out at www.ridethetrack.com