We hunched over the bar at Portal Brewing Co. as Mike looked around for a pen.

“I can show you a more scenic route -- it’s really beautiful!” he said, fumbling around underneath the bar for a pen and a paper napkin.

I nodded tentatively -- strange routes make me nervous. Bob said, “Oh yeah, I’ve taken the other direction, so this should be good.” 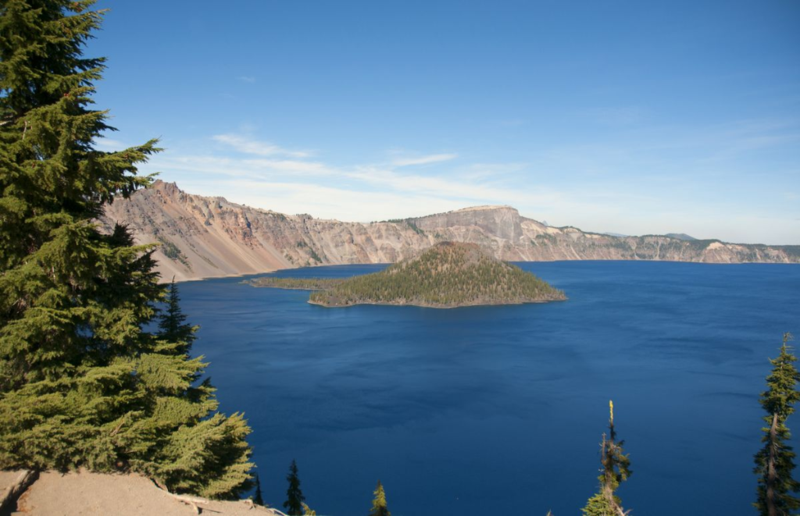 Mike’s little taproom was another of our drink stops on our grand tour of Southern Oregon. We found Portal Brewing Co. purely by accident as we walked from our room at the Inn at the Commons to Medford’s downtown.

Our stay in Medford included an impromptu tour of cheese shops, chocolatiers and tasting rooms of the Rogue Valley. Because our time there was short, we didn’t spend much time on our bikes. We did, however, manage to hop on our road bikes and finish our exploration of the Bear Creek Greenway to its northern-most town, Central Point.

On the Road Again

Our stay over, we packed the chocolates we bought at Lillie Belle Farms Artisan Chocolates and the cheese from the Rogue Creamery and we hit the road for a quick visit to one of the more well-known of Oregon’s Seven Wonders, Crater Lake.

Mike recommended Oregon Highway 62, the Rogue-Umpqua Scenic Byway. So that’s the way we went. The next morning we said our goodbyes to Maggie Groves at the Inn at the Commons and took off, following Mike’s napkin map with a little help from Google maps on our way to our next stop, Klamath Falls.

We had appointments to check out some of the bike shops in Klamath and maybe even meet one of our magazine clients while we were there. But, before Klamath, we had to visit Crater Lake, even if just to stop briefly and have a look. Since Bob was doing the driving, I figured he could pay attention to the directions. Besides, he had been up there before, I hadn’t.

As Medford dropped away from our rearview mirror, Rogue-Umpqua Scenic Byway climbs into the Cascades, roughly following the Wild and Scenic Rogue River. Just before Crater Lake National Park, the road ribbons past the Union Creek Resort and a small restaurant, Beckie’s Café, a frequent lunch stop for tourists coming from or going to Crater Lake.

The vintage Union Creek Resort is a cluster of  historic little mountain cabins built in 1922. Surrounded by old growth forest, the resort at Union Creek is located between the town of Prospect and the turnoff to Crater Lake. The area is honeycombed with trails in the old-growth forest for hiking and mountain biking.

There are swimming and fishing holes along the Rogue River and Union Creek. A short walk from the resort, waterfalls cascade through the narrow rock canyon of the Rogue River Gorge. I made a note that the next time we come up to Oregon, we really have to take time to explore some of the trails on our mountain bikes. 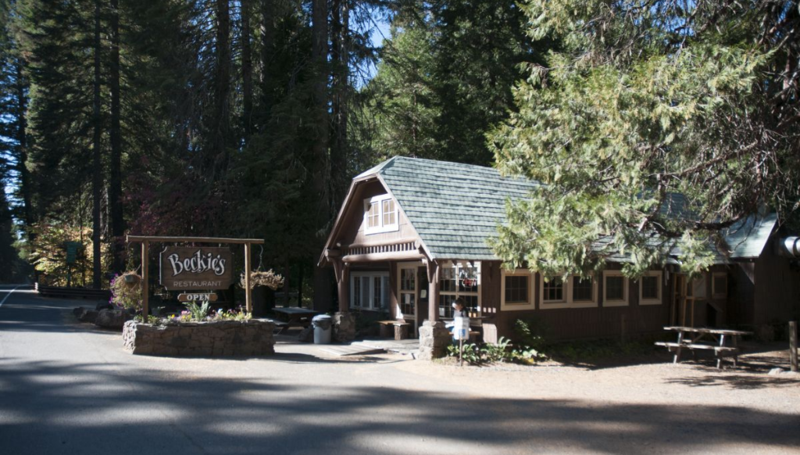 Tucked in beneath the pines -- Beckie's Cafe at Union Creek Resort

It was getting toward noontime so we stopped at Beckie's Cafe. As we waited for a table (Beckie’s is pretty much the only game in town for eating at Union Creek), we sat outside and breathed in the pine-scented air. Twenty minutes later we were seated in comfortable chairs and poring over the menu.

As we discussed our Crater Lake trip with Mike, he recommended Beckie’s pies. Maggie at Inn at the Commons said, “If you don’t eat anything else at Beckie’s, you gotta try a piece of pie, at least.” The pies are definitely a must. Beckie’s serves seasonal Oregon huckleberry, strawberry and peach pies and very berry, blackberry, boysenberry, blueberry, cherry, apple, pecan, chocolate, coconut, peanut butter, and banana any time of year.

Bob ordered a piece of Very Berry. I took a bite, because I was too stuffed for anything else. We declined the offer to take a pie with us, since we didn’t know if our next lodging in Klamath Falls would have a refrigerator.

Union Creek Resort is about 23 miles from the entrance of Crater Lake National Park. We found the entrance, paid our entrance fee and started our journey around this tiny lake, high in the Cascade Mountains.

Crater Lake partially fills a basin, more formally known as a caldera, that was formed when a volcano, Mount Mazama, collapsed during an eruption 7,700 years ago. The lake itself is unique in that there are no rivers that flow into or out of the lake, rather the water is replenished by rain and snow.

Dancing on the rim

The road around Crater Lake literally is a rim road, and to me, if was like dancing on the edge of a cliff. The road rolls right up to the edge, with the lake's surface down a very steep slope, then dipped down a short steep hill and away from the cliff edge then climbed a steep incline. The wind was our constant companion, singing through the pine branches. We could have been a million miles from anywhere, Crater Lake's solitude is complete. 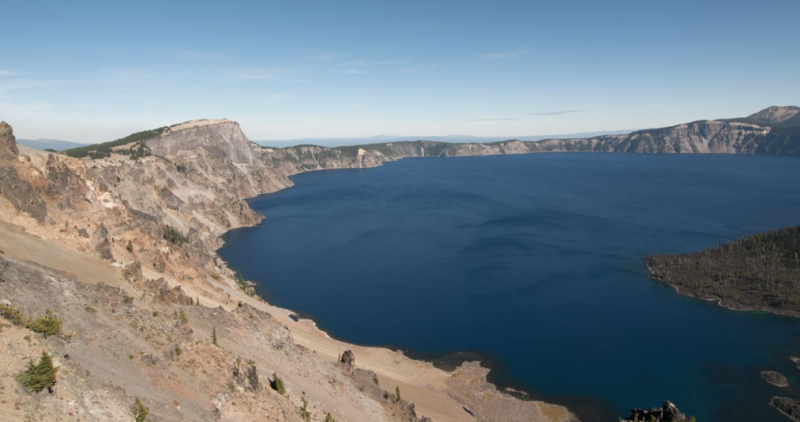 Crater Lake, a bowl in the sky

Each year Crater Lake hosts an event called Ride the Rim, in which the Rim Road is closed to cars on two weekends. This year Ride the Rim takes place on September 17 and 24 and is open to bikers, runners, and walkers. On September 17, participants have to pay the park entrance fee. On September 24, in celebration of National Public Lands Day, admission is free. The event itself on both weekends is free.

After stopping and taking lots of pictures, we turned our truck to the south, heading out of Crater Lake National Park to Klamath Falls.

Our other posts about our Grand Tour of Southern Oregon are: