After our stay in Ashland (see last week's post, Southern Oregon Grand Tour: Ashland), we and our bikes made our way up I-5 to Medford. Bob won a drawing for a couple of nights stay at the Inn at the Commons, along with a couple of meals at restaurants there courtesy of Visit Medford.

We didn't know much about Medford, except that it is on the way to Crater Lake. 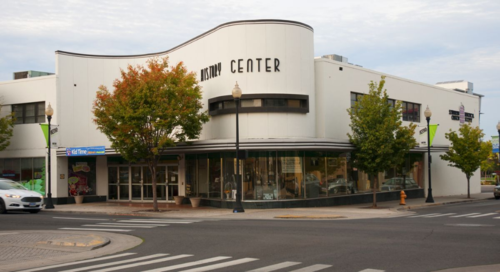 While this city doesn't have quite the reputation as a tourist destination that Ashland does, Medford does have a vibe all its own. Also, it is centrally located for day trips or stopovers out to the coast, up to Crater Lake, over to Ashland for the theater, but we spent some time getting to know this gateway to Southern Oregon's playgrounds.

Our hotel, the Inn at the Commons, is right in downtown. It is also located next to the Bear Creek Greenway, for a convenient bike ride or walk. We checked in and opted to check out the downtown, leaving the Greenway for another day.

Medford's downtown is experiencing a renaissance of sorts with projects aimed at revitalizing its core. One of the more ambitious projects, The Commons, includes two public park blocks which serve as informal public meeting space as well as a space for the Farmer’s Market and special events. We discovered on our walking tour of the downtown that many of the buildings have been restored to their late-19th century and early 20th-century glory, and house small independent businesses, coffee shops and restaurants. Many of the buildings reflect different eras (such as the Southern Oregon Historical Society's research library, housed in a former 1940s-era J.C. Penney Art Deco structure), giving Medford's downtown an eclectic look.

Because we didn’t know the area well at all, we stopped off at the local Convention and Visitors Bureau for some general maps and information about places to see in the area.

"What brings you to Medford?" asked the very helpful volunteer behind the counter.

I explained that Bob had won a stay at the Inn at the Commons, so we thought we'd take advantage and see what we could see. The helpful volunteer raised an eyebrow at that. "You came to Medford for a vacation?" she asked as if she didn't believe it.

One of the maps we picked up had a wine and cheese route, and we decided to see what that was about. Following the map, our first Southern Oregon wine tasting experience was at Le Petit Tasting Room for Ledger David Cellars. Ledger David’s signature wine is their Chenin Blanc and they also have a chardonnay, tempranillo and red blends. We tasted and bought a couple of bottles; all the better to remember this grand tour we were on.

Lucky us! Le Petit Tasting Room is located next to the Rogue Creamery, where we next tasted locally produced  cheeses. We also bought sandwiches made with their signature bleu cheese and sat and savored the warm creamy texture.

The Lillie Belle Farms Artisan Chocolates, also next door, has an amazing selection of chocolates for tasting and an even more amazing selection of sweets to take out the door. Of course, we availed ourselves of several of these treats, and I’m happy to say, they made the journey all the way home with us.

These three shops are located in Central Point, about five miles from our room at the Inn at the Commons. 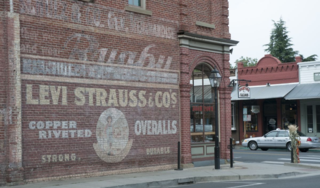 A little further afield we wandered to the town of Jacksonville, once named One of America's Top 10 Coolest Small Towns, by Frommers. In the very quaint 19th century downtown, we found wine tasting rooms galore, antique shops, boutiques, and restaurants. The town also boasts several B&Bs and a very laid-back mellow vibe, unlike the hustle of Ashland or Medford. This is definitely a town where we could kick back and just relax, maybe hit a tasting room or two (or three!), or just sit with a good novel and linger over a cup of gourmet coffee.

We stopped off at South Stage Cellars in Jacksonville. This tasting room is located in a 19th century red-brick building 125 South Third St. and offers several different varietals in what the owners say is Oregon's only vineyard-based tasting room: That is, they offer their South Stage Cellars wines produced by their own winemaker, and they also feature wines from other vintners, made with the same grapes and under their own labels.

Ride Oregon Ride (www.rideoregonride.com) has several bike rides through the area near Medford. One of these, the Sterling Creek-Applegate loop ride starts in Jacksonville at the Good Bean coffeeshop and takes riders to the Applegate Valley. The ride is about 26 hilly miles. The roads out from Jacksonville consist of A LOT of climbing, so be sure you are strong and able to ride. It climbs up to Woodrat Mountain then veers along Sterling Creek to Little Applegate and the Applegate River. Highway 238 takes you back to Jacksonville. Along this ride, you'll pass vineyards, rivers, mountains, and farms.

Want the feel of a trail under your feet? Hikers aren’t left out of the mix: Medford has an extinct volcano in its midst: Roxy Ann Peak. Located in 1,720-acre Prescott Park, the trail to Roxy Ann Peak showcases bountiful wildflowers, and while rated as a “moderate” hike, consists of a lot of steep climbing. The four-mile trail is also open to people with dogs (although four-legged friends must be leashed). Once at the top hikers view the sweep of Medford and much of the Rogue Valley and, on clear days, Mt. Shasta, Mt. Ashland, and the Crater Lake Caldera. 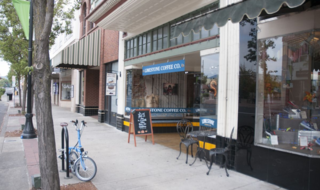 Medford has some fabulous restaurants and coffeeshops. Here are a few we frequented while we were there.

Limestone Coffee Company, (541) 973-2829, 217 E Main St. A Third Wave coffeeshop, Limestone offers pour-over coffee, that is, each cup is made fresh at the bar. The process takes a little more time than having someone pour you a cup of Joe, but that taste… so fresh!

Larks Home Kitchen Cuisine inside The Inn at the Commons, (541) 774-4760, 200 N. Riverside Ave. With its vintage-looking 1960s coffee shop exterior, Larks offers a menu packed with succulent fare, cooked from scratch using ingredients from local farms, ranches and wineries. The menu changes to utilize seasonal foods. The chalkboard on the dining room wall lists which farms the food of the day come from. Larks is a great place for a relaxing lunch.

Elements Tapas Bar, (541) 779-0135, 101 E. Main St. Located in one of those renovated buildings in downtown, Elements' interior is dark wood, with padded booths, tables, and cozy living room-style seating with leather chairs and coffee tables. There is no parking lot, though there is street parking and a few bike racks, so walking from our hotel turned out to be a great idea. We started our tapas experience with a meat and cheese platter, followed with sardinas de la casa. The wine list focuses on Oregon and Spanish varietals.

Rogue Creamery, (541) 665-1155, 311 N Front St, Central Point. Rogue Creamery is always changing up their offerings, but you can’t go wrong with their TouVelle Cheese, a semi-hard cow’s milk that they describe as an American original cheese.

Lillie Belle Farms Artisan Chocolates, (541) 664-2815, 211 N Front St, Central Point. Their  caramels, luxury truffles, and "Bean to Bar" chocolate bars are made with organic chocolate. The tastes and combinations of flavors are simply amazing, probably the reason why Lillie Belle Farms is considered one of America's Top 10 Chocolatiers.