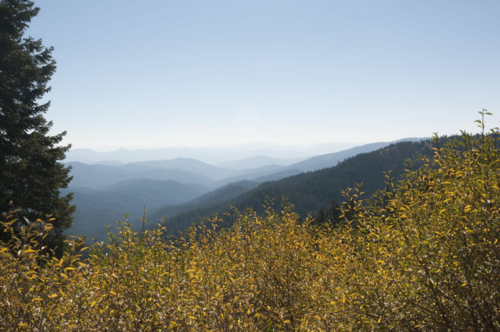 Like a lot of states, Oregon has a Scenic Byways initiative. Of interest to bicycle road riders, the state also has a Scenic Bikeways program that serves up some of the very best of Oregon’s scenic, historic, wild and natural experiences.

For out-of-staters, these routes offer a diverse view of Oregon’s many geographical areas. Some are linear and accommodate novice riders, while others are longer loop rides allowing a bike tourist to really explore a region during a day trip or even a multi-day, do-it-yourself bike tour.

The various routes around the state begin as suggestions from the locals, then go through a review process. As of this writing, Oregon's is the only Scenic Bikeways program in the U.S.

In southern Oregon, the Cascade-Siskiyou Bikeway is a loop ride of about 55 miles, with extended climbs through oak-dotted rolling hills to stands of Douglas Firs and about 5,000 feet of elevation gain.

On the coast, the Wild Rivers Scenic Bikeway offers 61 miles from the coast into the mountains beginning in Port Orford. Seventeen miles of the route goes through the Rogue River-Siskiyou National Forest and along the Wild and Scenic Elk River.

For bike tourists who would rather have someone else do the work while they enjoy the riding, Via Bike Tours offers guided rides along many of these roads. (Via Bike Tours is an advertiser in our publication, Cycle California! Magazine.) 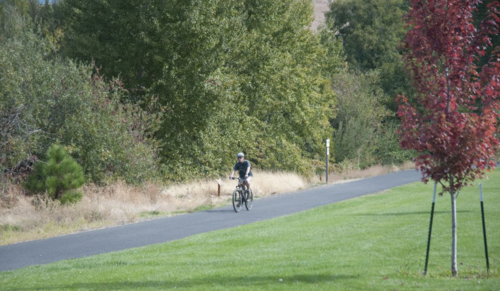 Bikeways or Greenways, Oregon has routes to accommodate all levels of rider

Southern Oregon has trails for people who like gravel grinding. One of the more interesting of these trails is the OC & E Wood Lines State Trail out of Klamath Falls. The trail stretches for about 100 miles along the former rail line of the Oregon, California, & Eastern Railroad. Along its length, cyclists experience views of farmland, forest, marshes, lakes, and sagebrush that characterizes this high desert terrain.

Klamath Falls can be a home base for mountain biking along some sweet, sweet singletrack, whether you like steep, as in the four mile Klamath Ridgeview Trail outside of town, or the longer, 15-23 mile Brown Mountain Trail. This loop ride rolls past old growth forests and has great views of Mount McLoughlin from its High Lakes trail.

Ashland, in addition to its world famous Bard-fest, the Shakespeare Festival, is home to mountain biking trails as well. From Lithia Park in downtown, the Lithia Loop Trail starts at the Upper Duck Pond and takes bike explorers through the Rogue River-Siskiyou National Forest lands above the town. Total distance is about 28 miles beginning with a steep 6 mile uphill, followed by 15 miles of level and rolling grade and ending with a steep 7 mile descent.

Like its more well-known sibling to the north, the Willamette Valley, southern Oregon boasts a wine country centered around the Rogue Valley that equals the world-class regions of California and Europe. While most Californians think of Oregon as a producer of all pinot, all the time, the Rogue Valley AVA offers a variety of varietals: from more Euro-style tempranillos and albariños, viogniers and gewürztraminers to chardonnays and cabernets, and of course, the occasional pinot noir.

The Rogue Valley AVA is the southernmost winegrowing region in Oregon. It’s made up of three river valleys (Bear Creek, Applegate and Illinois Valleys). Because the region is so varied, topographically, there is a wide variety of grapes grown: the Rogue Valley has microclimates in the west side of the valley that has cooler climate influenced by the mountains and ocean air; to the east the climate is warm and dry. 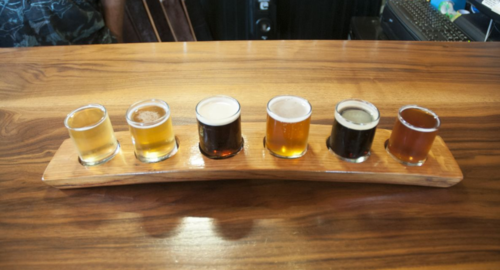 Maybe it's the water, maybe it's the homegrown hops, maybe it's a state that enables small businesses, but craft beer brewing is one of the hottest industries in Oregon, and according to Oregon Craft Beer, an industry booster, Medford has six of the 23 craft breweries in Southern Oregon.

Overall, Oregon is the number two hops growing region in the country, behind Washington state. In 2013, the state designated brewer's yeast as the offical state microbe, also making Oregon the first state to even have an official state microbe.

The Food's the Thing

While we stayed only a few days in each place, we found restaurants with food that enhanced the experience as we visited each town. Even the sports bar scene offered food that was locally sourced with thoughtful attention to the details.

Caldera Brewery & Restaurant and Caldera Tap House: With tasty bar food of locally-sourced ingredients and about 40 brews on tap, these guys could be a habit if we lived closer! Also big screens for watching national sports.

Elements Tapas Bar: A rotating menu of small plates, with a meat and cheese platter, followed with sardinas de la casa. An extensive selection of Spanish and Oregon varietals.

The Chef's Table: The sophisticated black-and-white motif lends an air of elegance to this bistro located in a strip mall, while the unique offerings such as a roasted red pepper soup or an Italian Cobb salad make the meals an adventure in flavors.

All-in-all, we learned a thing or two about southern Oregon. Our whirlwind trip taught us we need to go back and spend time in just one location -- we barely scratched the surface of what can be done in the region.