After a circuit around Crater Lake, we motored to south to Klamath Falls. Klamath is on the "sunny" side of Oregon characterized by high desert; the forested slopes of Crater Lake National Park were a distant memory as we headed south to Klamath Falls along Oregon Highway 140, which as it passes Klamath, is also known as the Volcanic Legacy Scenic Byway. We were making our way south on our Southern Oregon Grand Tour and our home for the next couple of days was the town of Klamath Falls. 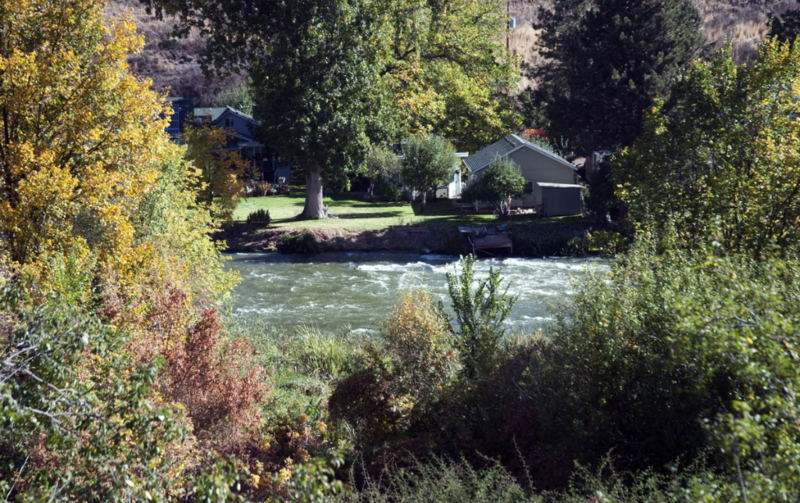 Small rapids that became the "Falls"

When Rapids are Falls

I have to be honest: I always thought with the word "Falls" in its name, Klamath must be near some really spectacular waterfalls. I was a little deflated to find out that the "Falls" were some small rapids on the narrow Link River that connects Upper Klamath Lake to Lake Ewauna. I also learned that Lake Ewauna is the headwaters of the Klamath River that flows 253 miles west to the Pacific Ocean.

I think it's fair to say Klamath Falls like Medford is a good jumping off location or base camp for people who really like outdoor activities. Both cities have all the advantages of being in a city: Good restaurants, coffee shops and brew pubs, good bike shops that a traveler might need. Both offer great access to all kinds of outdoor activities. It's a nice day trip up to Crater Lake from both locations.

We had the option of staying outside Klamath Falls at the Running Y Ranch Resort, near the shores of Upper Klamath Lake. We chose to be closer to the downtown, where there seemed to be more options for all-important food and coffee shops.

Klamath Falls has about 300 days of sunshine and being located on the northwest's largest natural lake, Upper Klamath Lake, there are opportunities for canoeing and kayaking, sailing, paddle-boarding, rowing and fishing. And, of course, bike riding, whether you mountain bike singletrack or take your skinny tires on Oregon's Scenic byways or down a paved trail. Ride Klamath Ride has routes, maps and information on road riding, gravel grinding, and mountain biking in the area.

Another resource with information for things to do and see in the Klamath area is Meet me in Klamath.

Moore Park, right in town, offers some sweet trails. Some of these are steep, and because the town is situated in high desert at an altitude of 4,500 feet,  you will want to pack a lot of water with you, even if you think you can handle a little bitty 4 mile trail. (Remember those 300 days of sunshine.)

In Moore Park, there is a 4-mile Ridgeview Trail ride that rewards you with a view of Upper Klamath Lake. The trail is steep singletrack, with a total elevation gain of 709 feet in those 4 miles.

For bike riders who don’t see the sense of riding in town, a little ways up Highway 140, the 10 mile Spence Mountain Trail awaits. Located between the lake and Highway 140 West, the trail has views of Upper Klamath Lake, Mt. McLoughlin and Mt. Shasta brooding in the background. This trail is the first phase of a planned 50 mile trail system in a privately owned forest.

Right in town is the Link River Trail, a one-and-a-half mile-long unpaved trail. The trail parallels the river in a cut canyon that connects Upper Klamath Lake and the Klamath River.

As with the mountain bike rides, there are several road rides that begin right there in Klamath. The Running Y/Triple Loop is one. From Veterans Park in downtown, this route takes riders out to the Running Y Ranch Resort via roads and a bike path along the south shore of Upper Klamath Lake. The route has some hills (it’s total elevation gain is almost 1,400 feet) and, because it does include a stretch on the unpaved Link River Trail, probably isn't suitable for bikes with really skinny tires. Total mileage is 27 miles if you ride all the way back into town. 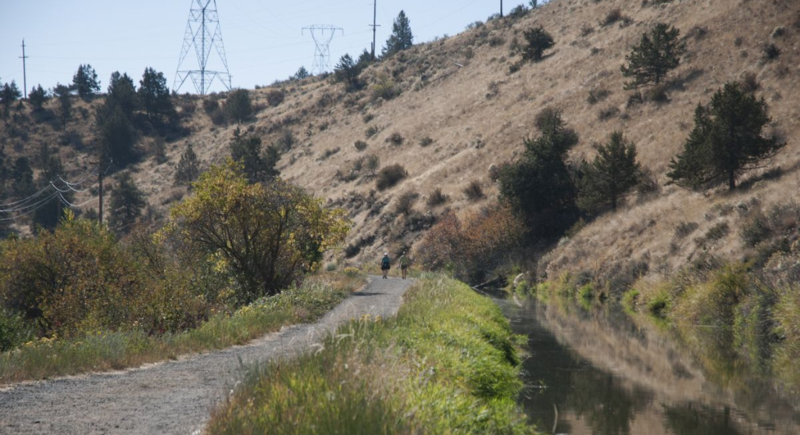 Another partially paved ride is along the OC&E Woods Line State Trail, a route along a former railbed for the Oregon, California and Eastern Railroad. The trail is Oregon’s longest linear park and is open to all nonmotorized recreation.

From Crosby and Avalon streets in Klamath Falls, the first 7 miles or so are paved and mostly flat. This section makes it a nice family ride. After mile 7, the OC&E becomes a gravel trail through the Winema National Forest. The ride starts heading south, then swings north to Olene and east toward Silver Lake. The terrain of this ride is varied: you roll past farmland, timberlands, and the Lost River. Total mileage, if you do the entire route, is approximately 90 miles.

Located as it is on a large body of water, Klamath offers sports in the form of sailing, canoeing and kayaking on the lake, rafting on the Klamath River.

The Upper Klamath Wildlife Refuge has a nine-and-a-half mile marked canoe trail that takes folks through a large freshwater marsh. Consisting of four segments, Recreation Creek, Crystal Creek, Wocus cut and Malone Springs and each has a different view of the Upper Klamath Marsh. The Rocky Point Resort rents canoes and skiffs and the canoe trail’s access is at the Rocky Point boat launch or Malone Springs boat launch. This canoe trail goes through lands maintained by the U.S. Fish & Game Service.

The lake is considered a great fishing hole by anglers looking for rainbow trout, although the best access is via canoe or kayak.

For birdwatchers, the lake is a paradise: A trek along the Klamath Basin Birding Trail passes through hot spots where it's possible to observe 350 species of birds. Actually, hiking anywhere along the trail serves up many opportunities for wildlife watching: Along your trek you might see muskrats, river otters and beaver.

Waffle Hut & Eatery, (541) 273-1444. We heard about the Waffle Hut before arriving in Klamath Falls. These folks serve Liege Waffles (pronounced Lee-age). The varieties range from sweet to savory. Your waffles come with a pile for meat, fruit, other topping, or plain. For the less adventurous, there is a wide range of traditional breakfast items. 2065 Oregon Ave., Klamath Falls

A Leap of Taste, (541) 850-9414.  If you’re looking for coffee, a light breakfast or light lunch,  this coffee shop is a great stop. Located in the heart of downtown Klamath Falls, they offer a respite for the traveler. The menu changes seasonally as they focus on local and sustainable ingredients. You’ll find fresh baked goodies, salads, and desserts. There is a full schedule of live music. A Leap of Taste also has free WIFI for staying in touch, while sipping a latte or cup of organic tea. 907 Main St, Klamath Falls

The Chefs' Table, (541) 850-9414 or (541) 887-2633. Looking for an upscale dinner without the gold-plated price? The Chefs' Table offers a wide range of steaks, pasta, chicken and soups and salads. The Italian flavors blend with local ingredients to make a wonderful dining experience.  Enjoy a bottle of local wine and relax with friends and family. 907 Main St., Klamath Falls