For us, a trip to Markleeville, California, for the Death Ride in July always includes a stay in Gardnerville, in Nevada’s Carson River Valley. While there, one of our favorite side trips is a roll to the pioneer town of Genoa, a pleasant bike ride, about 8.5 miles away. For modern bike riders, Genoa offers a slice of the wild, wild west.

This area of Nevada, right next to the California border, is located where the Sierra Mountains meet the high-altitude valley of the Carson River, a little south and east of Lake Tahoe. There are a couple of ways to ride to Genoa. I especially like this route because there isn't a lot of traffic. Many of the roads are straight and smooth with few intersections, nor have traffic signals. It's one of the reasons riding in the Carson Valley is one of my favorite experiences. 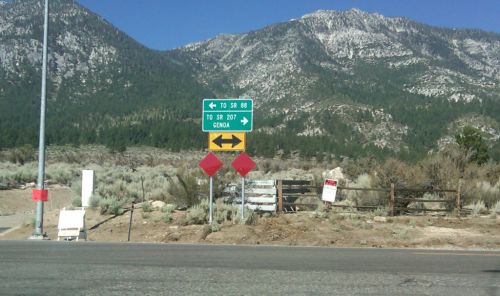 On the road to Genoa, Nevada, the granite peaks tower in the background

On the Road to Genoa

From our hotel in Gardnerville on Highway 395, the route goes from Nevada State Route 756 to SR 206, the main road into Genoa. Until it crosses Highway 88, SR 756 changes names a few times. As it crosses Hwy 88, it becomes Centerville Lane until it dead ends at SR 206, which, in a few miles, becomes Genoa's main street.

From SR 756, I make the right turn onto SR 206 and as I do so, I’m passed by a car filled with tourists heading to the intersection of SR 206 and SR 207, Kingsbury Grade, to get into Tahoe South for a day's fun at the lake.

SR 206 passes farmsteads and pastures as it follows the base of the Sierra Mountains. The road isn't especially steep, although it is at about 4,500 feet of elevation. The quiet two-lane road winds past farms and ranchettes, and pastures with small herds of cattle lolling in the sun-warmed morning air. As I get into a nice and easy spin I pass horses who barely look up from grazing as I go by.

Overhead tower the granite walls of the Sierra Nevada, making me and my road bike feel like a speck on the pavement. I'm comfortable that the very little traffic on the road will see me in my chartreuse riding jacket.

Ahead, about a quarter of a mile, I watched a mule deer amble across the road, through the yard of a large house and disappear into the pines that characterize this eastern slope of the Sierra. The first few buildings come into view to my right as I roll onto Genoa's three block-long main street.

The town is a small step back in time to the wild, wild west. Genoa was the first nonnative settlement in what was first called Utah Territory, later, Nevada Territory. The town was settled by John Reese and a group of Mormon men in June 1850 and became known as Mormon Station.

The place became a prosperous trading post settlement, servicing the folks who came west, lured by the promises of riches and gold. In 1855, the town's name was changed to Genoa by Orson Hyde. Hyde was appointed by the then-governor of Utah, Brigham Young, to serve as probate judge for the region and the spiritual head of the community.

The town has retained its Old West feel and look. New-to-the-area history buffs will want to explore Mormon Station State Historic Monument, a replica of the original 1851 trading post that Reese and his nephew, Stephen Kinsey, built.

Mormon Station State Historic Monument has a small museum and hosts programs for its guests during the summer months. On our recent visit we watched one of the rangers demonstrate how to cook an entire meal over coals using a cast iron Dutch oven. The hour-long demo ended with everyone receiving a piece of the bacon taco burgers he cooked right in front of us. He also made a peach drop biscuit cobbler in another Dutch oven.

Entry to the historic park costs $1 and children 12 and under are free (but obviously, donations of higher amounts are readily accepted).

The other museum in town is the Genoa Courthouse Museum, built in 1865 then rebuilt after the fire that burned most of the buildings in town. The Courthouse Museum features exhibits that tell the story of Genoa’s history and heritage. The website for the courthouse museum also has a map with all the town attractions. 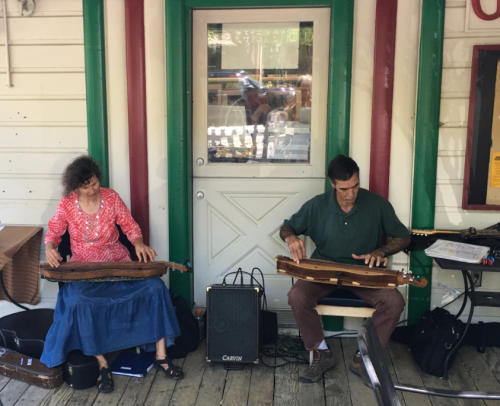 The eateries in Genoa rustle up some terrific vittles, just the thing for hungry bike riders! Across the street from Mormon Station, the Genoa Country Store has a deli with the most amazing sandwiches and a bar with craft beers and hard alcohol, if you're so inclined. They also serve fresh locally-sourced ice cream. During the summer months there is live music on the patio outside. As we ate we were serenaded by the chiming notes of mountain dulcimers played by local musicians, Stan and Jo of In Stride.

Across the street, the Genoa Bar & Saloon offers history of a different sort. Also known as Nevada's — and maybe even the West's — oldest drinking establishment, or "Thirst Parlor," the saloon was built in 1853. When we first visited Genoa, the bar keep said (by way of explaining why the windows were very dirty) that the cobwebs in the windows were as old as the building itself. The windows are cleaner now. 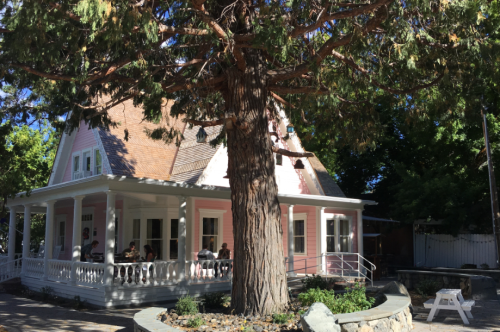 The Find of the Trip

One of the rangers at Mormon Station mentioned we should check out the Pink House, just up the block. I thought she was talking about a clothing boutique for women of a certain age, so in my mind I passed on the idea.

Out loud I said, "Thanks. We should check it out."

Then, as we chatted with the representative at the Chamber of Commerce kiosk, she mentioned the Pink House. I said, "Oh, that's the new boutique, right?" She stared at me then said, "Actually, it's a restaurant. They do cheese platters and glasses of wine."

After In Stride packed up their dulcimers, recorder and guitars and left the Genoa Country Store, we wandered over to the Pink House. It is, indeed, a very pink Gothic Revival-style house built in the mid-19th century and was our find of the trip in Genoa.

The Pink House serves a very nice charcuterie plate, wine by the glass, beer, and specialty coffee. We experimented with the custom board, which was any four items from the menu board (these change frequently), and a baguette, cheese, and accompaniments such as pickles, olives, jams for spreading and dry fruit. The menu includes salads, soups, and sandwiches and a few warm plates such as Cheese & Mac, roasted salmon over a bed of kale, or vegetable- and quinoa-stuffed peppers. The portions were filling and we didn't need a meal that evening.

Although we didn't take advantage on this trip, there is a hot springs resort for soaking away those aches from extensive bike riding. David Walley's Hot Springs Resort is located just south of Genoa. The resort was first opened in 1862 by David Walley and two partners. At that time, they had just a tent for shelter, but the mineral baths were $.50 a session. The first bath house went up the following year and the resort soon grew to encompass a hotel, ballroom, bath houses, and stables.

We rolled away from Genoa, amazed that for a small, western town, we hadn't even seen all it had to offer. That's okay, though. We will be back in the area next July, ready for more adventures in the wild, wild west.