Outdoors on the Bay: Alviso Marina by Bike

In our continuing effort to explore the world outside our front door, I signed us up for a free bike ride from the Alviso Marina through the Don Edwards National Wildlife Refuge. The flat, 9 mile bike ride takes place once a month, is put on by Santa Clara County Parks, and is suitable for people of all ages. 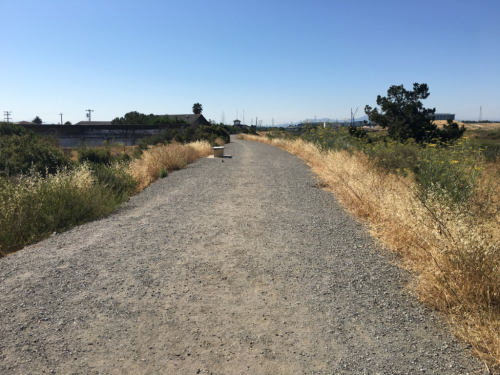 A Look Back Along the Trail to Alviso Slough

Alviso, a tiny town on the southern tip of the San Francisco Bay, was incorporated in 1852 then swallowed up by San Jose in 1968. Yet even today, the town retains some of its own identity in its historic buildings and proud signage that welcomes visitors to its outdoor activities on the edge of the Bay.

It also has a sea town vibe, leftover from Alviso's days as thriving sea port town with businesses that ferried people between the South Bay and San Francisco and Sacramento. It also at one time housed a vegetable and fruit cannery, the Bay Side Canning Company.

Historians believe the decline of Alviso’s port began around 1865 when the San Francisco & San Jose Railroad bypassed the town. Then the area became the victim of hydraulic mining in the far-away Sierra Foothills as soil that traveled downstream from the minefields ended up silting the southern portion of the Bay where Alviso sits.

The town also saw frequent flooding in wet years as the elevation sank, when agricultural users pumped more and more water out of the aquifer under the Santa Clara Valley. 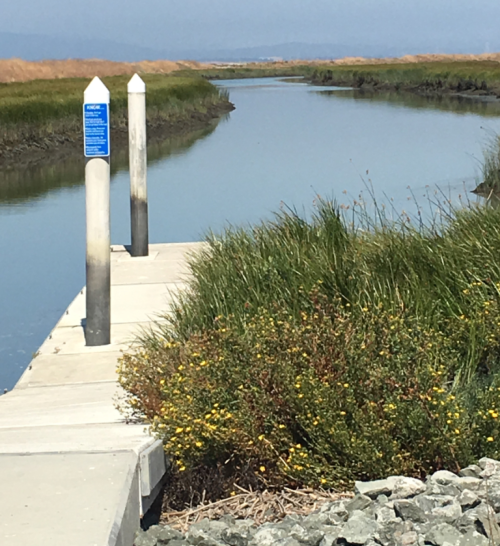 Looking toward the Bay from the Alviso Marina Boat Launch

But all that is in the past. Now Alviso is a sleepy suburb of San Jose, with a launch for exploring the South Bay by boat and miles of county trails for walking or exploring by bike.

Outdoors on the Bay

Our ride along the levees of the South Bay got us out in the sunshine to explore this area so different from that near our home, a mere 12 miles away by bike trail.

We got there in time for the ride, but didn't see anyone who looked like a docent who would be leading a group ride. No matter. We figured there was no way to get lost on the flat, wide levee paths. 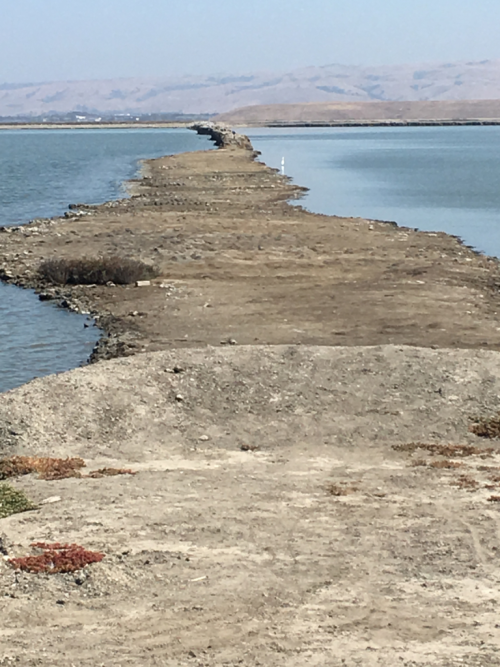 Before we took off along the Alviso Slough Trail, we met a couple folks who said they also signed up for the ride because they were taking the Parks for Life Challenge this summer. The Challenge is a game sponsored by Santa Clara County, that continues until August 21, in which people form teams and visit all the parks in the county-wide system. They document their visits and at the end of the challenge are eligible for prizes. The couple took off in one direction and we headed off in another.

Today there is yet a little marshland we found as we started our nine-mile loop, with more restoration taking place. Because Alviso Slough follows the channel out to the open waters of the Bay, we watched as kayakers and and canoeists came back in to the little boat launch. As we rode further out onto the levee trail, we watched as birds soared away from the reeds that lined the salt marshes of the slough.

We rolled by quiet ponds filled with coots, sea gulls, and my absolute favorite, white pelicans, along the trail into the Don Edwards National Wildlife Refuge past Coyote Slough and alongside the Union Pacific Railroad line used by the Amtrak Capitol Corridor.

The wind blew steadily, keeping the temperature down, although the sun beat down mercilessly. To the east, the rolling grassland of the Diablo Mountain Range undulated in all its brown summer glory, while on the other side of the bay, the blue-green Santa Cruz Mountains shimmered in the warm sunshine. Several miles to the north we could see a very large pile of salt; a product of the salt ponds owned by Cargill Inc.

From our vantage point, the San Francisco Bay sits in the middle of these two ranges; it was as if we were sitting in the bottom of a bowl.

We dawdled along, taking pictures of the waterfowl, the occasional walker and biker. It was a quiet weekend there on the Bay. 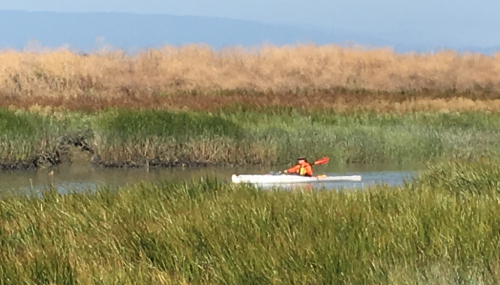 A Kayaker comes back to Alviso Marina

Boating on the Bay

Recreationalists who get their fun with water crafts can also enjoy a day on the Bay out of Alviso Marina. The county park is also designated as a site on the San Francisco Bay Area Water Trail Network.

For folks interested in using their boat out of Alviso Marina, the National Oceanic and Atmospheric Administration (NOAA), has navigational charts for these water trails around the Bay.

Bird-watching on the Bay

Because Alviso Marina County Park and the Don Edwards National Wildlife Refuge are located on the Pacific Flyover, the bird-watching is pretty spectacular. During the year there are 250 some-odd species of birds to observe.