August is the time of year when families are together again after the busy summer, school is in session (or starting up), and there isn’t much time during the week to get out on a bike. It’s a great time to #OptOutside.

In Found by Bike's continuing effort to think holistically about bike travel and local adventure, this week's post turns multi-modal. 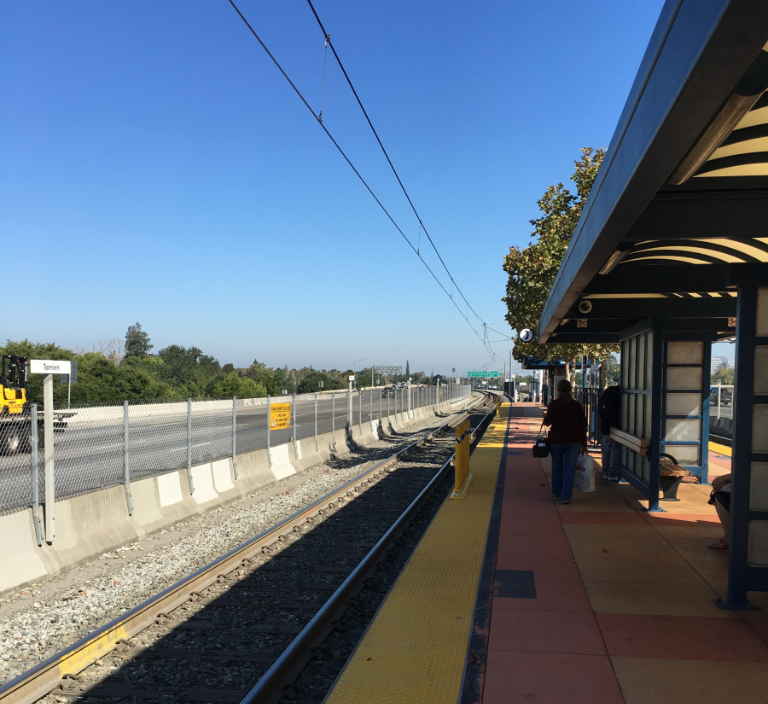 Taking your bike on transit extends your reach

August is also the perfect month to roll out of your garage to a local park. If you aren't lucky enough to live across the street from or even near to a regional or county park, there might be the option to go multi-modal, that is, use your bike on public transportation to get out and away.

Taking transit offers families a different sort of adventure. It's a way to get young ones used to using their bikes to explore, yet not as hard as taking a long ride out from home. It is the gift of active time with a family.

Northern California's transit agencies are just beginning to embrace the concept of allowing people and their bikes on public transit, which extends people’s ability to get away from home for a short or long day trip without using a car. I recently tested this theory, using Santa Clara Valley Transit's Lightrail system to take me and my bike out to the paved paths of Lake Almaden Park in South San Jose.

To add to the adventure, for anyone interested in dirt trail riding and more hills, the trails from Lake Almaden Park connect to Almaden Quicksilver and Santa Teresa County Parks.

The lightrail line I chose is the Alum Rock to Santa Teresa line. The line is easy to pick up in downtown San Jose as it has several stops there. It is also near most of the downtown transit hubs: Caltrain and Amtrak, many bus lines, and the Highway 17 Express bus stops. The lightrail trains run about 10 to 18 minutes apart.

At the Ohlone-Chynoweth station, I exited and waited for the train that would take me along the one-stop spur to my final destination: Almaden Lightrail Station. The trains are well-coordinated, so that my wait was about 5 minutes. The ride itself was about 5 more minutes.

If you want to try using transit to get to this area of South San Jose, Transit and Trails, run by Santa Clara County Parks and Recreation Department, has a trip planner you can use.

A park with a beach

The Almaden Lake Park is located a very short (half-mile) ride from the Almaden station. I made a left on a short street between to enormous apartment complexes and made a right onto Winfield, then at the light a block away crossed over Coleman Rd. There, to my right, sat Almaden Lake Park, San Jose's only park with a beach. 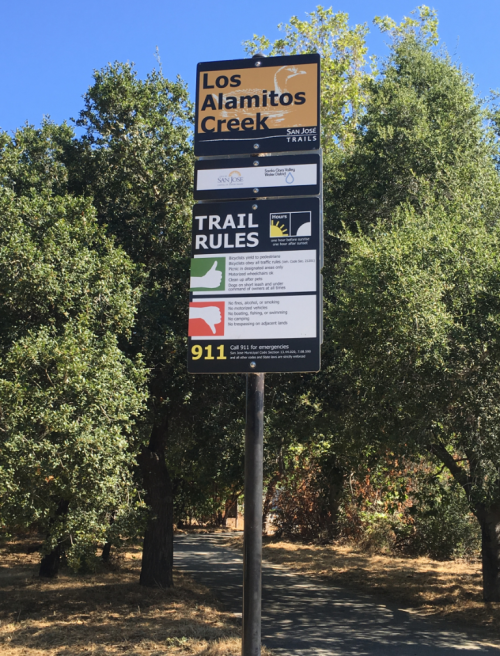 Outside the pedestrian gate to the park at Winfield Blvd., I followed the road around the lake and its play area to the trailhead for Los Alamitos/Calero Creek Trail and headed south. This trail is jointly managed by the City of San Jose and the Santa Clara Water District. From this direction, the paved trail goes against the flow of Alamitos Creek as it drains from the eastern slopes of the Sierra Azul down into Almaden Valley and into Almaden Lake.

The trail  is flat, which makes it ideal for families with small children or novice riders. It follows the meandering creek along its natural curves past the hulking million dollar homes of the latest developments and along Almaden Expressway and Camden Road. As it curves away from the neighborhoods, I can imagine being out in the country. There is an equestrian path along part of the Los Alamitos Creek Trail, but on this day I didn't see any horses.

The trail crosses over a couple of semi-busy roads that have no traffic controls, so I stopped and waited cautiously to cross. 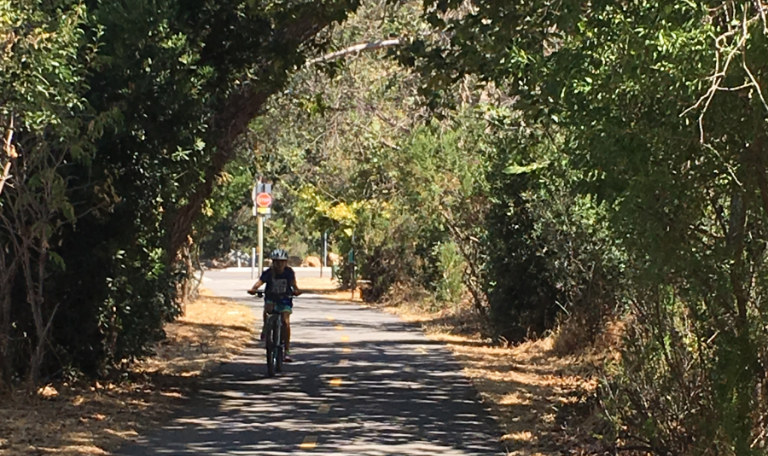 The trail takes riders out to Harry Road, which it crosses, then continues into Santa Teresa County Park with its hills and dirt trails. Santa Teresa hooks mountain bikers up with rolling fireroads that climb the hills. From these rolling hills the view of Santa Clara Valley spreads in front of you, and on a clear day, you can see the Sierra Azul to the west and Mount Hamilton to the east.

On this day, I had to get back to the office, so I left exploring Santa Teresa County Park for another, perhaps not as hot day. I followed Los Alamitos Creek trail back the way I came, to Lake Almaden and the lightrail station.

Lake Almaden park is the site of an old quarry. Because of major problems with algae bloom, it is closed for swimming, but there are paddle boats for rent for people who want to get out on the water.

There are several tables for picnicking, a nice lawn, and bocce ball courts located on the east side of the park. The courts are self-serve, BYOB as in, Bring Your Own Balls to play.

When I was there, a large group of children were learning to cast their lines for fly fishing.

There were also several families on bikes riding the trail.

Lake Almaden Park has a lot going for it: activities, Los Alamitos Creek Trail, wildlife, access from transit, it’s just the ticket for spending an August afternoon with family, being active. It’s a simple transit ride and serves up ample opportunity to explore the world right outside your door!