Out and about at Almaden Quicksilver County Park

The lazy and indeed hazy, days of summer are coming to a close. Here in the Bay Area, children are back in school and families don't have as much leisure time together, but they still have their weekends. May I suggest using part of a weekend to get out and about and explore a regional park near your home?

A local park has real upside: You're near to home so the fun is immediate: You won't spend hours just getting to a trailhead.

This is especially important if you have small kids: The trip won't take long and no one will be exhausted by the time you get to your destination. Also, if things go pear-shaped, local means you aren’t that far from home.

Local regional parks can offer a glimpse into what the world looked like a hundred years ago, rolling hills dotted by oaks; redwoods soaring skyward, and seasonal creeks trickling gently. 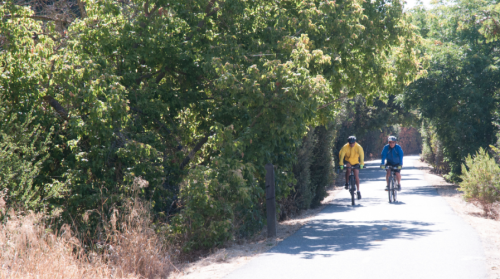 For my local trek, I grabbed my rarely-used mountain bike and headed for the hills -- the rolling hills surrounding the Almaden Valley in San Jose, an enclave of horse owners (yes, there still are a few in San Jose), mega homes and a Santa Clara county park: Almaden Quicksilver. This ride can also be done with a road bike, if you're not interested in riding the park's dirt trails. Just getting to the park is a nice ride.

I started my journey at Almaden Lake Regional Park, near the last stop of Santa Clara County's lightrail line. For more about using lightrail with a bike, last week's post explains.

From Almaden Lake Park, I rode the tree-lined paved trail along Las Alamitos Creek to get to Harry and McKean Roads then followed McKean Rd. to Almaden Rd. into New Almaden and Almaden Quicksilver County Park.

Almaden Rd. narrows from its two- and three-lane expressway configuration to one lane in each direction as it snakes through the hills. The park is located next to New Almaden and surrounds the site of the old mercury mineworks.

Part of the fun of riding a bike is the exploration. Until this trek, I had never visited New Almaden.

Although incorporated into San Jose, it is still considered a separate town, particularly by the old-timers, some of whom come from families that go back generations in New Almaden. Located about 14 miles from San Jose's downtown, the place does seem very remote from the city. Despite its name, New Almaden was founded in 1854, to distinguish it from Almaden, which was founded in 1846.

The California Gold Rush informs a lot of the history around Northern California. The ore from the now-closed mercury mines was used to extract the gold from the ore mined at Sutter's Mill and other sites in the mid-19th century. The mines created a boomtown of sorts in this part of South San Jose. Just outside the park's Hacienda entrance, I passed by Casa Grande, where the Almaden Quicksilver Mining Museum is now located. The mining museum is part of the New Almaden Historic District, where several historic houses still stand along with the Hacienda Hotel, now La Foret Restaurant, which serves upscale food.

The park itself is about 4,100 acres in an area that includes the now-closed mercury mines, hence the “Quicksilver” in the name. The park's trails are steep, and a biker or hiker will experience elevation gain from about 600 feet above sea level to about 1,700 feet. These trails pass buildings left over from the 135 years of mining and give some areas of the park a ghostly feeling. 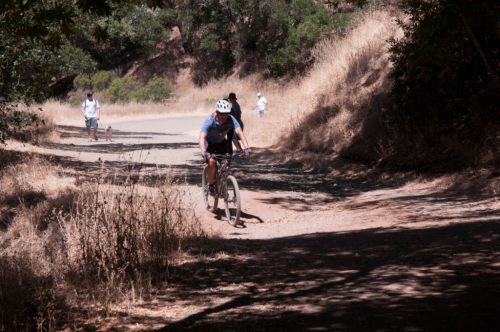 This year, the county has initiated improvements for the Senador Mine watershed, so some of the trails will be closed until November. The county has published a map of the trail closures located here.

When exploring Almaden Quicksilver by bike here are a couple of suggestions:

Bring lots of water. The trip out to New Almaden from Lake Almaden Park is largely unshaded and the summer sun is hot! This brings up the second item:

Start your ride early in the day. There are a couple of reasons for this: The riding is cooler and there are fewer drivers on the road.

Wear bright colors. This helps you be noticed by drivers as Almaden Rd. narrows to one lane in each direction.

Have fun! There are wonders outside your doorstep just waiting to be explored. Seize the moment, grab your bike and get out and about!