Dancing on the Edge: Adventure in Tahoe South

As bicycle magazine publishers, we do spend a fair amount of time on the road during the century ride season in Northern California. As the season winds down we usually hit our last major trip of the year: Tahoe South, for Bike the West's Tour de Tahoe: Bike Big Blue.

Our Tour de Tahoe adventure is always a fun trip. The area is a vast playpen for outdoor enthusiasts that includes granite mountains, rivers, and lakes. There are trails for hiking or biking, alpine lakes for water sports, and narrow high-altitude roads that sweep around Lake Tahoe's edge.

September in the area has so many advantages: The weather is warm but not hot and the roads are cleared of the midsummer tourists. For those of us who aren’t about winter sports, Tahoe South offers opportunities to get out on our bikes and ride the roads or myriad trails, put on our boots for a hike or simply explore and revel in the end-of-summer solitude on the trails.

Since this was a weekend trip (and we would be working for part of that time), we brought our mountain bikes for a little trail riding. As we summitted Echo and sailed into the Tahoe Basin, we thought we'd start with a very short hike from Inspiration Point to Eagle Creek and its beautiful, accessible falls. The two mile out-and-back hike begins at the parking lot at the Eagle Falls Picnic Area, so it should have been an easy no-brainer, just off of California Highway 89.

Unfortunately, Caltrans had other ideas. Road construction closed the parking lot we wanted, and the road was lined for miles with tourists’ cars parked along either side. Eagle Creek was a no-go this trip.

"Uh, let's go to Fallen Leaf Lake and take a little mountain bike ride," I suggested. Making a u-turn on a narrow mountain highway with large earthmovers, asphalt trucks, steam rollers and various other construction trucks and crews made for a hazardous challenge, but we were soon on the road back the way we'd come to Fallen Leaf Lake. 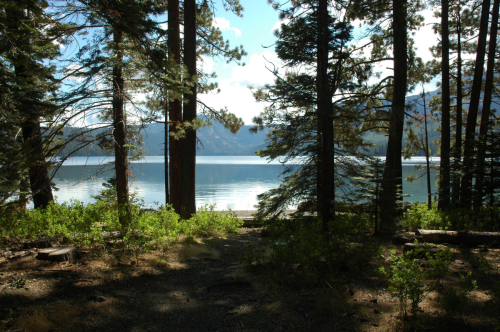 An alpine jewel, this little lake (less than two miles long and almost a mile wide) is located off of Highway 89 at Fallen Leaf Rd. about a mile south of Lake Tahoe.

A millennia ago Fallen Leaf was carved out of the granite mountains by a glacier traveling south to north. Surrounded by forest, the lake sits at the base of 9,700 foot high Mount Tallac. There are a number of trails in the area, including some not-super technical singletrack, which makes exploring the area fun even if you’ve never been there before. Because the lake isn't that far from California State Highway 89, it's pretty hard to get lost on a trail, as there are roads nearby. 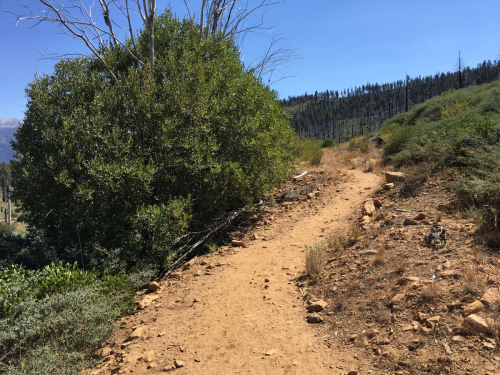 Some of the biking trails around Fallen Leaf are no-names on the maps. We parked near the trailhead of these unnamed trails, a Forest Service road that started wide and turned into narrow singletrack. The trail led us through a gate and along a sandy trail into an area that burned during the 2007 Angora Fire.

As we rode, the trail took us up a ridge through the recovering forest and we could just see Lake Tahoe's blue waters to the north and east. The trail turned into rocky double-track that intersected another trail. We followed that fork to where it ended in a dense neighborhood of houses and cabins.

Unfamiliar as we were with the trails in this part of Tahoe South, we thought about heading back on Highway 89 to Fallen Leaf Rd. Thinking the better of that action after remembering the traffic from the construction project, we decided to simply turn around and power ourselves back up the hill the way we came.

The beauty of riding around Fallen Leaf Lake is that, while you are near to town, you can also access some of the spectacular open spaces that make the Tahoe Basin famous. Fallen Leaf is an access point to the Desolation Wilderness, an area on many hikers’ bucket lists. The lake itself is a a quiet, peaceful getaway with a small beach. Just be sure to park in the public parking spaces when you get there and heed the no tresspassing signs near the private residences at the south end of the lake.

Tahoe - Bears in the Woods

While we were at Fallen Leaf Lake we also experienced the intersection of wildlife and the busy-ness of the human population: We saw a close encounter of a bear kind.

As we were trying to find a place to park our truck and get the mountain bikes off the back, we saw a construction worker standing next to his truck, gesturing wildly. He was parked at the side of the road next to a small meadow and in the meadow was a bear, hunkered down in the foliage.

Bob thinks the bear was doing what bears do in the woods when that worker spotted him. He had a look of misery on his face (the bear, not the guy) that said, "Could you please leave me alone? I have something to do."

Lately, whenever we're in Tahoe South, we've seen black bears right where the population and traffic come together. It does seem that more bears are coming down from the mountains and forests that surround the lake, a situation exacerbated by the ongoing drought conditions the area is experiencing. Last summer a mother bear and her cubs were videoed doing what families do when they vacation in the area -- taking a cool dip in Lake Tahoe.

Experts on bears in the woods say that mostly black bears are shy and they don’t bother with humans and will generally run away when confronted by a human. But what should YOU do if you encounter a bear on the trail?

The National Park Service's website has some suggestions for bear encounters: Identify yourself by talking calmly so the bear knows you are human. 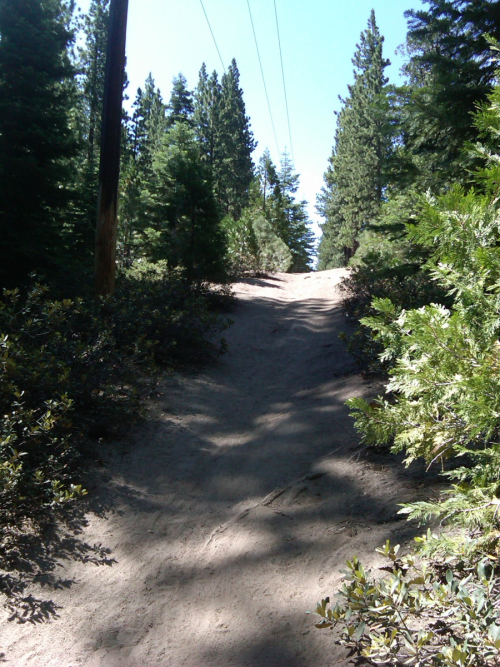 Powerline Trail away from the Heavenly Ski Resort in Tahoe South

Another trail we like to ride when we don’t have a lot of time to spend is the Powerline Trail, that we pick up just off of Ski Run Blvd. at Heavenly Ski Resort near Stateline. From Highway 50/South Tahoe Blvd., head toward the top of Ski Run Blvd. and make a right on Saddle Rd. The trailhead is where the road deadends. Parking is restricted in the area, so we usually ride our bikes from our lodging to the trailhead. The beauty of Powerline is that it does connect to other trails in Tahoe South such as Corral, Cedar and Cold Creek, so if there's time, we can add on mileage and make our ride a loop rather than out-and-back.

The Tahoe Area Mountain Bike Association (TAMBA) has a nice map of some of the major trails in the Tahoe South area and some of the access roads near the trails.