On Sunday, November 13, urban messagers, bike couriers, racers, and just plain folks are reaching for their backpacks, panniers, and cargo bikes and riding Cranksgiving San Jose to bring in the goods for Second Harvest Food Bank of Santa Clara and San Mateo Counties.

A race/scavenger hunt, Cranksgiving San Jose is an alleycat-style event that has as much emphasis on having fun as it does on speed. This first-time event for the Bay Area (there are Cranksgiving races in other parts of the U.S.), is the inspiration of Erin Dorcy, a recent transplant to the Golden State.

"I used to ride in the annual Boston Cranksgiving. When I moved to San Jose, I saw that there wasn't one held locally." So, she sought out others in the local cycling community and, with their help, started organizing a local Cranksgiving. And why not? The city’s relatively flat terrain and mild weather even in November, makes it the perfect place to start a Cranksgiving event. 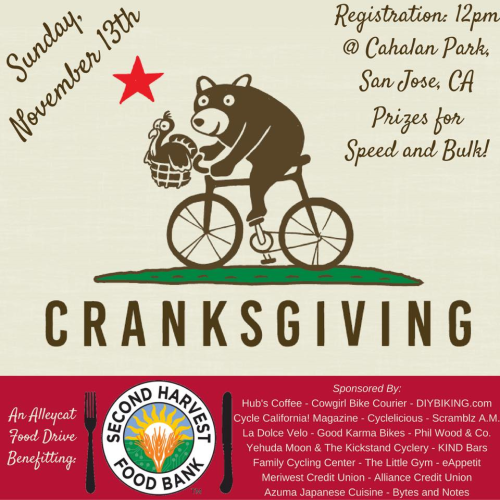 Alleycat racing is typically an informal urban race featuring the type of riding bike messengers do. In this case, Cranksgiving is a different type of spin in that participants load their bikes with food, so speed isn’t necessarily going to win this race. It's this informality that makes it fun for anyone to participate in, that and a few surprise tasks, adds Dorcy.

She, along with her crack team of volunteers, have spent the past few months organizing, publicizing, and promoting Cranksgiving San Jose.

Racers have two categories to choose from: Speed and Cargo, although Dorcy is looking into adding a family-friendly route for next year's event.

As Cranksgiving is also part scavenger hunt, there will be interim tasks, or "Surprises," as Dorcy calls them, that will earn the participants bonus points. "Racers won’t know what the surprise tasks are until they pick up their manifests." (Manifests are the cue sheets that will reveal items on the shopping list, where the checkpoints are, and specified stores, as well as some of those surprises.)

This event also requires knowledge of the roads (or at least, a very good gps system), because the speed racers will have to strategize the quickest route getting from store to store and to the finish. As with most alleycat races, Cranksgiving San Jose participants will be sharing the roads with car traffic.

Cranksgiving San Jose is free (participants just have to sign up on November 13), but they will be buying food items as they ride the streets between checkpoints and stores on their way to the finish line. The anticipated cost of the food for the Speed Race will range from $15 to $20.

The second category, Cargo racers, on the other hand, earn their points based on the weight of the food they can haul to the finish line for the final weigh-in.

Cargo racers also have checkpoints and will be buying items specified on the manifest. They also can buy extra approved items to add to the final cargo weight. The winners will be determined by the weight of the food they haul back to the finish.

Riders in both categories will also need a way to carry all the food they obtain during their race, so a backpack, panniers, or a bike that will carry pounds of food items will be most useful for them.

Yet, even more than speed or muscle, Cranksgiving "Consists of ride faster, haul heavier and get creative." Dorcy adds, "Also, knowing the city and where each store is helps, so you aren't riding in circles."

What about prizes? There are interim prizes available, depending on how well the racers complete their ride. Dorcy is keeping the prize list a secret. But some of them are bicycle-specific, some not, and some are cool schwag that any biker would want. 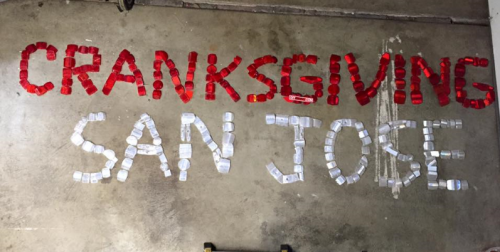 Registration begins at noon on November 13 at Cahalan Park, when participants sign their waivers and pick up their manifests. Everyone planning to participate fills out a waiver, gets the manifest, which includes a list of the approved grocery stores, food items, and a city map. The cargo racers have to be finished by 4 p.m. so their items can be weighed. The weigh-in will take place at the parking lot at Hub's Coffee. After the race, the party and the bragging starts as everyone relaxes and congratulates the winners!

Second Harvest Food Bank of Santa Clara and San Mateo Counties provides food to 250,000 people a month -- which makes it one of the largest food banks in the nation. They estimate that one in 10 people receive food from Second Harvest.

The irony of the situation is that while Silicon Valley is one of the wealthiest areas in the country, the region also has a hunger and malnutrition problem, perhaps owing to the high cost of living here.

Dorcy hopes Cranksgiving San Jose will help bridge this gap and enable anyone interested cyclist to get out for an afternoon and race for food donations for Second Harvest. They're giving and receiving!