You've been dropped into San Jose, California, for a sales meeting. The meeting doesn’t start until Wednesday, but your company’s cheapskate travel department found rock-bottom airfare into San Jose International Airport two days early. So, how will you spend your 36 hours in San Jose?

You brought your folding bike to get around without having to wait for a ride from somewhere. Here are some suggestions to help you spend that time getting to know one of California’s most enigmatic cities.

You are at your downtown hotel by 10 a.m. Although check-in isn't until 3 p.m., the hotel clerk let you leave your bags behind the front desk. You pull your folding bike out of the larger suitcase and set it up all ready for action. So what's next?

San Jose's downtown has many independent coffee shops with coffee drinks, table space to spread out and reliable wifi. A quick web search and you are on your bike, laptop in your bag, headed along the paved Guadalupe River Trail toward San Jose’s Little Italy neighborhood and Bel Bacio Imported Italian Coffee right on the trail. The back of the shop is right on the bike trail and there is parking on the street out in front. You go for the Doppio (double espresso) and a chocolate biscotti as you check your emails online. 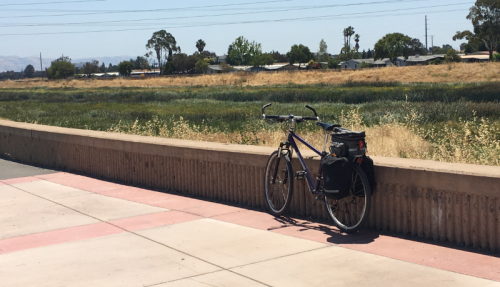 By 11:30 a.m., you've had enough computer time and your stomach starts to rumble. The next web search you do reveals that one of San Jose's neighborhoods is right at the tip of the San Francisco Bay and has a decently rated Mexican restaurant. So you hop back onto your trusty folder, get back out to the Guadalupe River Bike Trail and head toward the Bay and Maria Elena's Mexican Restaurant. A mere 45 minutes later you roll through the portals onto Gold St. and you are in Alviso, San Jose's only waterfront community. Now a part of San Jose, the community still retains a little of its old identity with its historic buildings. 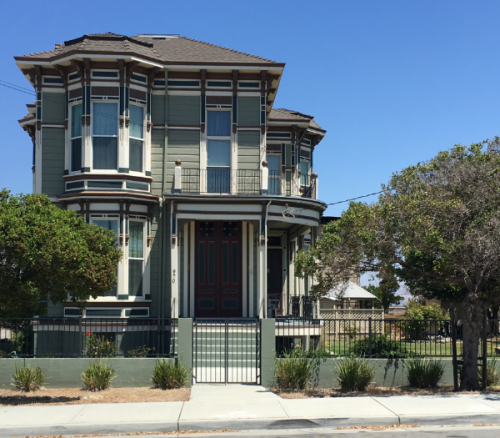 A glimpse of former glory: The Tilden Laine Mansion, Alviso

Following your very filling lunch you ride over to the Bay and park your bike to walk along the levies of Alviso Marina County Park. Your bike's tires are best suited for asphault or concrete rather than off-roading along the unpaved, rutted levies. You watch a midday kayaker paddling back in from the San Francisco Bay out of Alviso Slough.

Brews in the 'hood

With the Bay behind you and the wind at your back, you ride the eight miles back into downtown San Jose along the bike trail to check in to your hotel room.

You ask about local tap rooms and the very helpful desk clerk turns you on to Santa Clara Valley Brewing, just off First Street on Alma Street. You make your way onto First Street and follow it to Alma. A half block from the intersection, you make a left into the driveway of Santa Clara Valley Brewing's taproom for a cold pint of Electric Tower IPA.

All this riding around is making you a hungry and, since the taproom doesn’t serve food, someone tells you about Original Joe's, at the corner of First and San Carlos Streets. Back on your bike and roll along First Street and arrive at the mid-20th Century-style vintage diner. Original Joe's offers pasta and other Italian-type fare, served by bow-tied waiters in tux jackets, in a vintage meets modern setting. You could just imagine the Rat Pack hanging out in one of the booths in a place like this.

After a spaghetti-and-meatball dinner, you wobble out of O Joe's (as the locals have designated it), but don't feel quite like tucking yourself under your covers just yet. Three blocks away is Poor House Bistro, where live music is always on. This little New Orleans-style pub has live blues and music from the Mississippi Delta. It also offers beignets, those little puffed pillows drowned in powdered sugar. Grab an order and sit outside and catch the tunes.

You wake up and feel like you've done everything San Jose has to offer. Or have you? After a breakfast at Whispers Café and Creperie at 150 S. Second St., Social Policy San Jose beckons. This coffee shop (otherwise known as So/Po) on the Paseo de San Antonio walkway between First and Second Streets has all types of coffee drinks from hand-poured drip to more traditional lattes and cappuccinos. 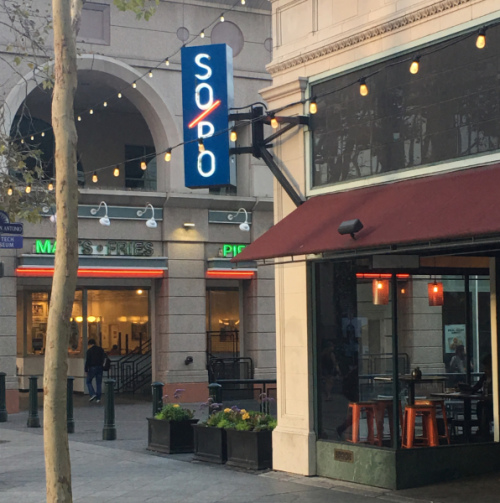 The public wifi at So/Po is fast and you finish answering your emails in record time. Now it's time to head to the hills. You walk to the VTA lightrail stop with your bike, buy your ticket and when the train comes, you and your bike onto the Santa Teresa line for a ride to the Almaden Light Rail station in South San Jose.

Essentially, you are going in the opposite direction of yesterday's trek out to Alviso and the Bay: You're heading south toward the foothills of the Santa Cruz Mountains. 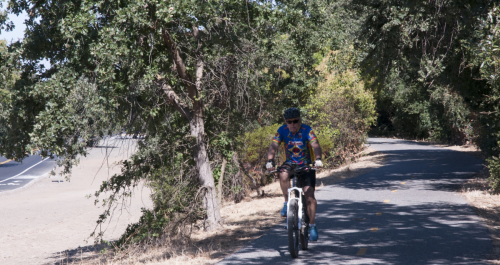 At your destination, the shady paved paths of Almaden Lake Park follow Los Alamitos Creek as it meanders its way downhill to where it is stopped up at Almaden Lake. The bike path is only about four miles end-to-end, and the riding is smooth and easy. Even on a weekday you have opportunities to chat with other bike riders who come along, then peel off to go their own way. The bike paths are on either side of the park, so you can make your ride a bit more of a loop back to where you picked up the trail at the parking area.

All this bike riding is making you hungry, though. So, today's web search brings up an eatery, Mo's The Breakfast + Burger Joint, on Almaden Expressway, not too far away from the entrance to Lake Almaden.

After your (very large) Mo's All American Classic burger with the works and Mo's special sauce, you're feeling like you want a nap. Hhhmmm. Sounds like a good idea.

You make your way back to the VTA lightrail station and wait for the train to take you back downtown to your hotel, where you stretch out for a well-deserved nap.

You've experienced some of the bike riding, food, and music San Jose has to offer and experienced parts of the city most visitors don’t see.

Best of all, you found it by bike as part of your 36-hour trip.