Better to be seen: Latest in bike light tech

Now that it's official and the shorter, darker days of autumn are here, let's think about how you light your way on your morning or evening bike commute. Allowing you to see and to be seen by distracted drivers, lights after dark are the law of the land in California.

California Vehicle Code 21201 (d) (1) states, "A bicycle operated during darkness upon a highway, a sidewalk where bicycle operation is not prohibited by the local jurisdiction, or a bikeway, as defined in Section 890.4 of the Streets and Highways Code, shall be equipped with all of the following: (1) A lamp emitting a white light that, while the bicycle is in motion, illuminates the highway, sidewalk, or bikeway in front of the bicyclist and is visible from a distance of 300 feet in front and from the sides of the bicycle."

Statistically, although fewer people ride bikes in the dark, 40-60 percent of injuries and fatalities take place during the hours of darkness. Thus the importance of being seen. Reflectors on the front, rear and wheels of your bike are a good place to start, but having the capability to see where you're going in the dark is important, as well.

A buzz phrase for the bike lighting world is 360 degree lighting -- now there are many options for systems that light your frame and wheels, so that you are visible from the side as well as the front and the rear.

There are also add-on bands that can be attached to bike frames and bags that offer another source of light to help you be seen, even if alone they won’t help you see. 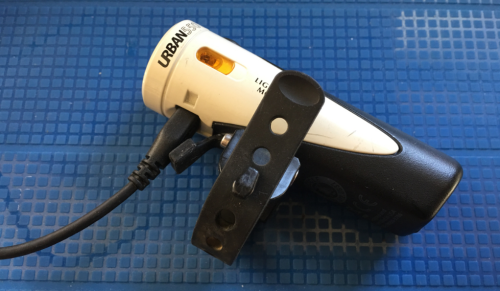 This headlight is easily rechargeable via a USB port

Deciding on type of headlight is right for you depends on the type of riding you do. Do you typically ride reasonably well-lit urban roads? Are the roads smooth or in bad shape with potholes and debris that can throw you off your bike as you ride along? Are the roads straight or curvy?

Or, say you ride trails. Bike light manufacturers recommend using a light with a narrower beam for riding on well-lit roads and one with a wider beam spread for dark roads or trails.

Walk into any bike shop at this time of the year and there will be a selection of lights from little "emergency" lights to the high-end lighting systems with rechargeable batteries. You'll find halogen, light emitting diodes (LEDs), generator or dynamo systems that use either one of these types of lights.

The price points of these lights differ from relatively cheap but bright lights that run on standard disposable batteries, to those with rechargeable batteries that plug into any USB port. Finally, there are lighting systems that charge and run on a generator or dynamo hub that require neither type of battery.

These also are a must-have if you ride in the dark. Most of them are LEDs and very bright. Most taillights have a couple of modes, a steady beam and a flashing option. Other models have brightness adjustment features so you can tone down the light when brightness isn’t necessarily needed, such as when the light is low, as in foggy or wet conditions.

Technically, this is a semiconductor that produces light. One drawback to an LED light is that its brightness drops off if it becomes too hot. An LED's lifespan is about 100,000 hours. In comparison to halogen lights (see below), LED lamps are more power-efficient, using less battery power, so you aren't stuck replacing or recharging batteries as often as with other bike light solutions.

These were an industry standard for several years. Halogens are generally less expensive than an LED system and for those DIYers out there, their circuits are easy to repair. The main drawback to halogens is that they aren't very efficient and as such, have a limited run-time between battery charges. Also, the bulbs don't last as long as those of LED lights. The light is a little yellowish, when compared to LEDs, which have a clearer white light.

As Derek Markham writes for Treehugger.com, "…without replacement batteries, the most powerful or effective bike light on the planet is about as much use as a brick…" So, the following systems offer reliable lighting solutions, without the worry of using up battery life.

For the truly eco-friendly commuter, generator or dynamo systems are the way to go. These little gems are powered by a roller that sits against the tire. As you pedal along, the tire rotates the roller and generates power for the lighting system. These lighting systems have been around for decades and modern versions have a capacitor that keeps the lights on while you’re stopped at a stop light.

The advantages of this system is pretty obvious: It has no batteries to recharge or replace and they can be built into the front or rear wheel hubs. You will never be caught at night without a light on your bike. They are inexpensive to run, mainly because you aren’t paying for batteries. You don’t have to remember to charge them, so you always have your lights with you.

A drawback, however, is that a complete dynamo system can be expensive. They are harder to retrofit and the lights can cut out a lower speeds. They are also not quite as bright as the above options.

Similar to dynamo systems are electromagnetic lighting systems. Like the former, these don't require batteries. They use magnets attached to spokes to generate power to the LED bulbs. As with the dynamo system, you won't need to invest in batteries to light your way. With a magnet on the wheel and a magnet on the light, when the wheel turns the magnets pass each other, creating an electric current that makes the light flash. 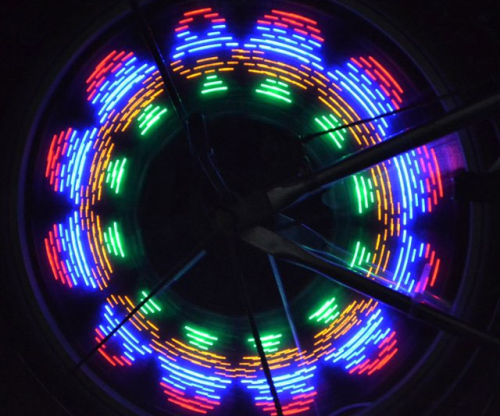 Monkeylectric.com has a programmable lighting system for your spokes

Emergency lights are more of the "get-me-home" option to help you be seen if your primary light fails or you are caught out after dark without it. Usually LEDs, most of these little lights have a flashing and steady modes and the lights come in various colors. They are usually very small and can be attached to a seat post or handlebar (or even the back of a helmet) with a stretchy band of some sort.

Tire reflectors that attach to your spokes also help with being seen from the side. Front and rear reflectors help you be visible to drivers. There are also bands of LED lights that you can wrap around your frame that illuminate your bike from the side.

Some tire manufacturers have reflectorized bands near the bead that light up when a cars' headlights shines on it.

There are also lighting solutions that throw down amazing designs on the wheels that drivers can see.

These solutions don’t necessarily help you see the road ahead, but do help you to be seen by other road users. 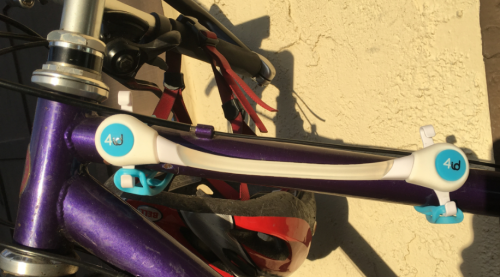 Whatever system you choose, bike lights increase the chance of you seeing and being seen on the road. Use your lights and be safe.