An homage to the World's Greatest American Racer

Picture a time in America's distant past, when bicycle racing was the most popular sport in the U.S. (and the world), and while Europeans were into it, Americans and Australians were not that far behind. It was a time, between 1880 and 1920, when racing was practically America's national sport.

Into this milieu rode Marshall "Major" Taylor. A teenager in 1891, Major received a bicycle from a friend's parents and saw its potential: For fun, for helping him find and keep work, for helping make a name for himself.

This week, for African-American History Month, Found by Bike explores the history and legend of this great African-American athlete, probably the greatest bicycle racer this nation has ever produced. Taylor became world champion at the beginning of the 20th century. He set world speed records and was the first African-American to become a world class athlete in what was at the time a very popular major American sport. 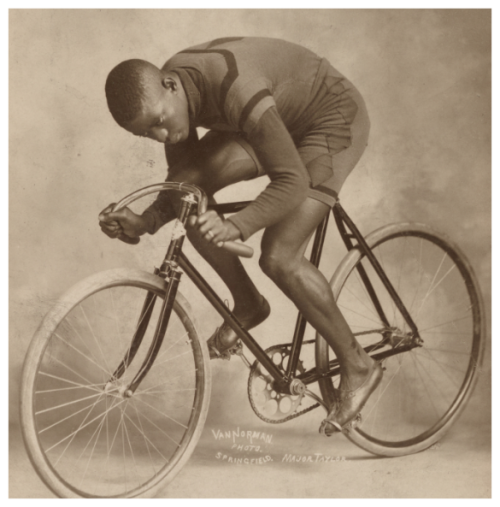 Toned and ready to take on the world, Major Taylor became a world champion bike racer in 1899

Taylor's career as a racer started when he was about 13 years old. With his bike, he earned money delivering newspapers. When he wasn't working, he was practicing tricks and stunts and caught the eye of someone at a local bike shop in his hometown of Indianapolis, Indiana. The shop's owner, Tom Hay, hired him to wear a military uniform and do some of the stunts he practiced in his spare time. The uniform became the reason for his nickname, which seems to have stuck, for that is the name by which we know him today.

His first race took place when Hay entered Taylor into a 10-mile road race -- something the teenager had never heard of before. The legend is that Hay whispered to him at the starting line, "I know you can't go all the way. Just ride up the road a little way, it will please the crowd, and you can come back as soon as you get tired."

The race was in a handicap format: Taylor would get a 15-minute head start on the rest of the field of amateurs. As author Todd Balf relates in his book Major, "It was the hare-and-hound format with a twist -- a black boy and a pursuing white mob."

Thus started an illustrious career that was the stuff of legend: A David and Goliath story of a son or grandson (it has never been fully documented) of slaves vs. the rest of the world. A young black man making his way in an American society when most professional sports were played white men. Or looked at a different way: Taylor was a small, young phenom taking on his more experienced, larger, stronger racing brethren.

As he entered more and more amateur races and won, he was noticed by Louis "Birdie" Munger, a washed-up ex-bike racer with ambitious plans to manufacture racing bikes. The time seemed right to catch the bicycle racing craze that was sweeping the nation from the San Francisco Bay Area to Manhattan and Detroit south to Dixie and having a hardworking young racer on his payroll would allow him to showcase his sleek racing bikes.

Munger saw in Major Taylor a hunger and drive to be the best (something Munger could relate to). He became Taylor's mentor and friend.

Taylor moved at age 17 to Worcester, Massachusetts to work for and train with Munger, but came back to Indianapolis to race. Eventually Indy's Capital City Track banned him from racing there -- it wouldn’t do to have a young black man racing and bettering his more experienced white counterparts.

He continued to hone his craft with races around the midwest and northeast, despite his being banned by the League of American Wheelmen, which was the race sanctioning organization at the time. (The LAW eventually moved away from the race business entirely, then changed its name to the League of American Bicyclists, the name it has today). 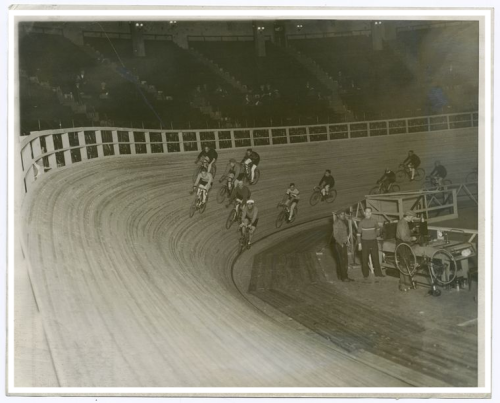 Track racing was wildly popular with spectators until the early 1920s

After turning pro, Taylor finished his first professional race -- a Six Day Race at Madison Square Garden. This form of racing originated in England around 1881, eventually was banned there, and made its way to the U.S. where several venues hosted these week-long events.

The format of these races tested the athletes' endurance, their ability to ride continually, and even their ability to stay awake as they raced around a cinder track for six days. It was continuous, nonstop riding. When these races were first introduced, racers rode solo. Eventually the format was modified to two-person teams.

Think of it: Bike racing on a track was race promoter's dream: The format was truly spectator-friendly. The audience could sit and watch the racers go around, and around, and around. The promoters loved it because it held an audience captive. Spectators liked it because they could gamble on the outcome; besides, there were always spectacular crashes and even some deaths.

These races were like a latter-day Super Bowl -- with all the attendant hype. Despite crashing from exhaustion and wanting to quit, Taylor finished this, his first pro race, placing eighth.

The business of bicycle racing is a brutal one; racers rode for themselves but would make quick alliances with other participants on the track; they would break those alliances up when a more advantageous relationship rose.

For most of his career, Taylor had to go it alone without the help of race allies. Perhaps this was why his races were strategic, utilizing his strengths as a sprinter and his keen ability to survey the race landscape and get out of jams. Racist attitudes on the part of his fellow riders played no small part in the events he entered. Yet he persevered, rising to the top as world champion in 1899.

Of his moment on top of the world, Taylor wrote in his autobiography, The Fastest Bicycle Rider in the World, "It was the first time I had triumphed on foreign soil, and I was thrilled as I heard the band strike up The Star-Spangled Banner.

"My national anthem took on a new meaning for me from that moment. I never felt so proud to be an American before, and indeed, I felt even more American at that moment than I ever felt in America."

The spirit of Major Taylor lives on in a number of bike clubs around the country dedicated to preserving his name for future bike riders (and who knows? Maybe even for bike superstars in the making) to learn about this piece of American bike racing history.

Major Taylor told his story near the end of his life in his autobiography and kept numerous scrapbooks documenting his career as one of the greatest American bike racers. These scrapbooks open an important window on American sports history as well as provide a personal story of American society as the country moved into the 20th century. Several of Taylor's scrapbooks are online through the University of Pittsburgh's Archives Service Center.

There are several books on Taylor's life, in addition to Balf's. Two of them are Major Taylor, Champion Cyclist, by Lesa Cline-Ransome and Major Taylor: The Extraordinary Career of a Champion Bicycle Racer, by Andrew Ritchie. Unfortunately, his autobiography is out of print, so is very hard to find except in libraries.

An organization, The Major Taylor Association, was founded with the mission of conducting good works in his name and educating people about his life and legacy. Taylor's name lives on in the many bike clubs around the country as well.