You ride a bike — and love all things bike. Here are eight books about bicycling: Murder mysteries, histories, a coffeetable book, travelogues. Since Valentine’s Day is on a weekday this year, stay in, pop open a nice bottle of red, cue up a box of fancy chocolates and read about that passion: Bikes! 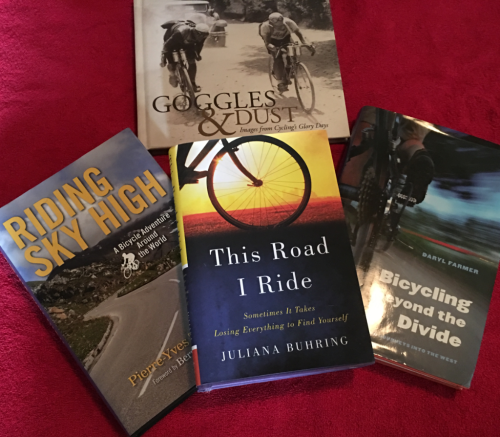 These three novels were published in 1998 and 1999. I read this series after the last book in the series was published back around the year 2000. These books have it all: Bike racing, romance, PEDs, intrigue, murder, and mayhem, all the elements of a good mystery series. The first two stories take place in Europe, set against the seedy backdrop of the Tour de France, while the third is set at a mountain bike festival in Colorado.

Two Wheels introduces Will Ross, washed up American pro racer, probably on his last go-round, having never experienced Le Tour, except as a spectator. He surprisingly, is picked to replace European phenom, Jean Pierre Colgan, after he dies in an exploding toaster accident, on the powerful Haven Pharmaceuticals race team.

Perfect Circles takes up where Two Wheels leaves off -- Will is still on Team Haven, determined to have his shot at riding and finishing Le Tour de France. His romance with Cheryl Crane, the team soigneur, starts to blossom as he carries the team all the way to the Tour de France.

The final book, Derailleur, takes readers on the roller coaster ride of professional mountain bike racing — as it was in the 1990s. Will Ross and Cheryl Crane leave the Euro road scene behind to join Haven’s mountain bike team and find that chaos follows them as they dodge hit men and smugglers as their romance blossoms. Murder and rabid environmentalists make an appearance along with the cult figures who populated the mountain bike festival scene back in the day. For the Adventurer in You

This Road I Ride, by Juliana Buhring

Armchair travelers follow in Buhring’s wake as she tells this very personal story of mourning and the need to be part of something larger than herself. In 2012, she rolled away from her home in Naples, Italy, for a record-setting, around-the-world tour to honor the memory of her partner, an explorer who died seeking the source of some unmapped rivers in Africa.

Buhring beat the odds on her trip around the world: She learned after she was already entroute, that she should have ridden from west to east, rather than east to west. Despite this, she surpassed the around-the-world record. Her feat was all the more impressive since she and never seriously ridden a bike before.

She asked herself "Why not the world?" when a friend suggested she honor the memory of the man she loved by riding across Canada. This Road I Ride chronicles the challenge she set herself to best the Guiness World Records' fastest circumnavigation of the earth. 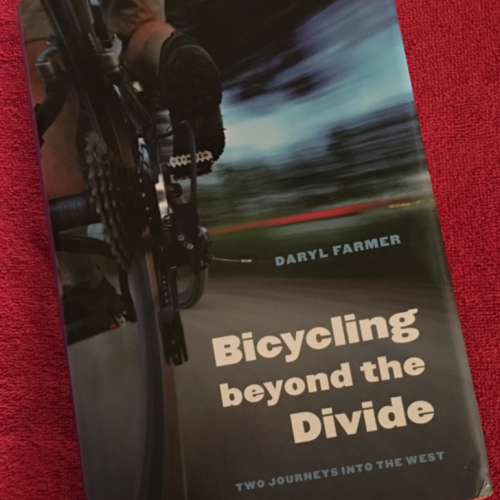 A Ride, a Life

Bicycling beyond the Divide, by Daryl Farmer

Another personal journey in the vein of This Road I Ride, Bicycling beyond the Divide is the story of Daryl Farmer's two journeys west. In 1985, at the age of 20, he charted his own course from Colorado in a giant circle that took him up to Alberta, Canada, through Wyoming, Idaho, and Washington, down the coast to San Francisco and over to Nevada, Arizona, and back to Colorado Springs.

In 2005 at the age of 40 he challenged himself by riding the same course. Bicycling beyond the Divide is the story of a bike journey, but it is also a story of the journey of a man’s life and the change that happens as a boy grows to be a man.

Before the car, bikes were primarily transportation. Easier to deal with than horses and cars (both need fuel), the bike was an elegant solution to the problem of personal transport. In 1909, 17-year-old Vic McDaniel with his friend Ray Francisco, took advantage of a couple of second hand bikes to ride from Santa Rosa, California, north to Seattle, Washington. Their destination was the Alaska-Yukon-Pacific Exposition. The book, written by McDaniel’s daughter, retells the story of a couple of 17-year-olds and their adventure as they experienced terrors such as being caught on a train trestle with a train bearing down on them and a nocturnal visit by a grizzly bear, among many other experiences, both good and bad.

Another Around the World Story

Long distance travel can be transformative, emotionally and physically. Taking a slower approach than Buhring's to bicycling around the world, Pierre-Yves Tremblay rolled away from his home in Quebec Province, Canada and also took on the world.

Using a bike and air travel when that wasn't practical, Tremblay rode 15,000 miles and experienced everything from the heights of the Himalayas, the wide-open expanse of Australia, the rainforests of Southeast Asia, the deserts, ghost towns of the American Southwest and the tornados of Oklahoma.

Tremblay kept a journal of his thoughts, feelings and experiences, the basis of which became this book. 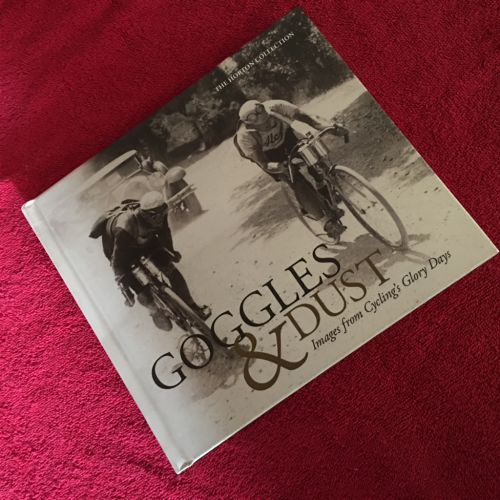 The Greats in Black & White

Goggles & Dust, from the Horton Collection

If reading isn't necessarily your thing, perhaps this small photo book is more like it. Goggles & Dust features black and white photos documenting the "glory days" of road racing in Europe. This collection, owned by Brett and Shelly Horton, include images of the greats such as Ottavio Bottecchia, Eugéne Christophe, and many others, focusing on Euro racing during the first 40 years of the 20th century.

This year, avoid the crowded restaurants and the cheesy cards -- sit in and pick up a good bike book!