The Safest and Most Scenic Bike Rides in the Bay Area 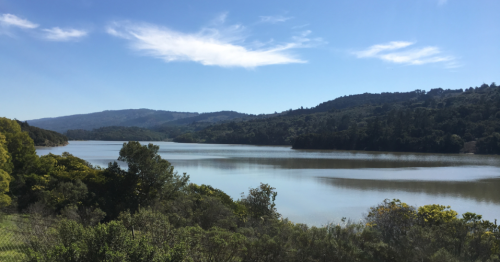 This week, we have a repost from the Bay Area Bicycle Law blog by Michael Stephenson. Michael is a trial lawyer specializing in bicycle accident lawsuits, insurance negotiations, and other strategic planning. His legal writings have been featured in the Portland Business Journal, the Oregon State Bar Litigation Journal, the Oregon State Bar Professional Liability Newsletter, Davis Wright Tremaine newsletters and websites, and in other publications. In his spare time, he volunteers as a legal counsel for bicycle advocacy groups in California, including California Bicycle Coalition, San Francisco Bicycle Coalition, and others. While Bay Area Bicycle Law doesn't financially support this blog, the firm is a Cycle California! Magazine advertiser.

Although the Bay Area is populated by big cities and busy streets, there are plenty of opportunities to ride your bike without having to struggle against sometimes-terrifying traffic most urban cyclists are familiar with. In fact, bike rides in the Bay Area are some of the best in the country!

We are lucky to be relatively closely surrounded by nature in nearly all of our cities, and even some areas that are free of our area’s famously devastating hills too, so you can get out on your bike and enjoy our mild climate (when it’s not too rainy) all year round with the entire family.

If you are looking for safe and scenic bike rides in the Bay Area, check out this list for inspiration. No matter whether you’re riding with kids, with inexperienced cyclists, or with hard-core cyclists in the mood for a leisurely jaunt, you will be able to find a route that is safe and gorgeous that everyone will enjoy.

Tennessee Valley – This is one of the most popular rides in Marin County, so it’s only fitting that we start with the Tennessee Valley trail. Over the course of around 4 miles round-trip, cyclists of all ages and ability levels can enjoy a ride through green valleys (which means no hills!) and end up at a fantastic beach. If you don’t like crowds, it’s probably best to try this trail on a weekday or go earlier in the morning; however, even during the busiest times, this trail is a crowd-pleaser with tons of scenery and no interactions with cars.

Samuel P. Taylor State Park – Another favorite Marin route that allows cyclists to ride without having to deal with car traffic is in Samuel P. Taylor State Park. The park’s bike trail starts just south of Lagunitas Creek and runs for 3 miles, one-way. It winds along the creek, with plenty of access points where you can get off your bike and explore on foot, if you wish. Since it runs right along the water, you can bet this trail is low on hills and is mellow enough for anyone to enjoy.

Crystal Springs Trail – If you are in the mood for an easygoing long ride, look no further than this route that can take you from San Bruno to Woodside. The Crystal Springs Trail, which runs just alongside Highway 280, can be as long as 13 miles if you start at the trailhead of the San Andreas Trail, go along to the Sawyer Camp Trail, and finally end on Cañada Road. On the other side of the path is the Crystal Springs Reservoir, whose sparkling lakes makes this trail one of the most scenic in the area.

On Sundays between 9 a.m. and 3 p.m., you can enjoy a 5-mile stretch of car-free riding along the final, southern section along Cañada Road from Highway 92 to Filoli Road. With a 15 mph speed limit and the road open to pedestrians, runners, and cyclists, this route is as family friendly and gorgeous as they come. 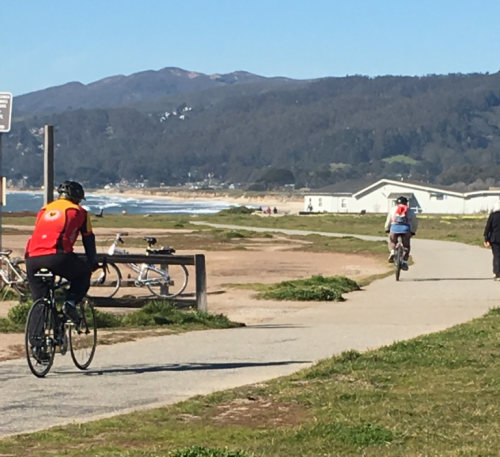 Half Moon Bay Coastside Trail – Craving some sweeping ocean views without the killer climb up the Bay Area’s meanest hills? Visit Half Moon Bay’s 10-mile roundtrip Coastside Trail, which runs between Pillar Point Harbor and Poplar Street. This easy trail is paved the entire way, and affords cyclists incredible views and a low-key ride — with plenty of opportunities to hop off the bike and hike down to the beach too.

Golden Gate Bridge – San Francisco’s mean streets aren’t for the faint of heart cyclist. But taking the Golden Gate Bridge out of San Francisco and into Sausalito is an incredibly easy bike ride that give cyclists some of the best possible views of the city out there. Start at the Golden Gate Promenade and head into the tunnel to the bike lane across the bridge. Walled off from car traffic, the bike lane will allow you to go at your own pace as you enjoy 360-degree views of the city, the Marin headlands, and the ocean. Take the bike lane back home, or catch a ferry back to the city from Sausalito.

Lake Chabot Shoreline Trail – Riding along this enormous lake means an easy, relatively flat path with scenic water views the whole way. If you’re riding with kids or you’re just in the mood for a mellow ride, you can ride this 6-mile out-and-back trail without worrying about busy car traffic or other hazards in your way. About 1.5 miles down the trail, it turns from paved road to dirt, so simply turn around here if you don’t like unpaved terrain; however, even the dirt path is friendly and flat, and continuing on will allow you to reach some of the best views in the whole park.

Eastshore State Park Beach Trail – It’s an easy ride with incredible views of San Francisco along this 5-mile round trip trail. This bike path is paved the entire way, making it easy for anyone to enjoy; it’s also fairly flat, since it curves along the eastern shore of the San Francisco Bay. Start at Emery Point and end up at Berkeley Marina, where you can turn around to pedal back to the start. As you ride, you can see sailboats, wildflowers, and downtown SF across the bay, and when you get to Berkeley Marina, you can stop to take in scenic views from the Bay Bridge to Mount Tam.