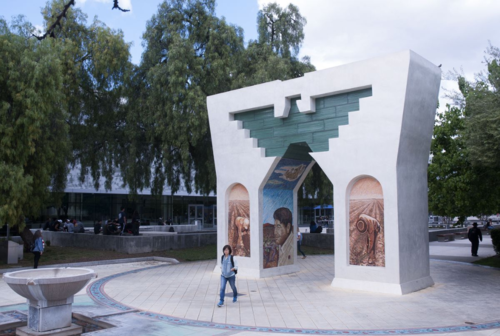 While enroute to follow a different story, I rolled across a bike route that takes people from downtown San José to the city’s Eastside area. Unlike most of the east-west roads in the city, there are no freeway on- or off-ramps to cross, so bicyclists aren’t fighting with high-speed traffic trying to get onto the freeways or off. Because it isn't one of the more popular east-west routes in the city, San Antonio doesn't get a lot of traffic. I also thought of this as a nice San José story for Day 9 of #WeCreate408.

San Antonio St. begins life in downtown as a pleasant alleyway called El Paseo de San Antonio, that traverses between the two Fairmont Hotel towers and a florist, coffee houses, a post office, wine bar and urban bike shop as it meanders toward San José State University (SJSU). As it crosses 4th St. and continues its alleyway presence onto the SJSU campus it goes through the César E. Chávez Monument Arch of Dignity, Equality and Justice.

The mosaic-encrusted monument is emblazoned with the United Farm Workers eagle and mosaic of Chávez himself and the Mahatma Mohandas Ghandi. University students walk, ride or roll through the memorial's heavy arches, unaware or uncaring of the message of peace -- they're more interested in getting to their next classes.

I slow down to avoid the crush of skateboarding and texting students as I followed the path between buildings, past the new Student Union, across the blocked-off-to-traffic roads in the center of the campus and out the end to Tenth St., where E. San Antonio St. picks up as a road.

As it intersects Tenth and Eleventh Sts., E. San Antonio St. passes several large fraternity and sorority houses, some of which started life as Greek houses in the late 1950s, then became halfway and rehab houses for drug addicts in the 1960s and 1970s. Eventually these buildings were converted back to student housing, which they remain today. As a former student of SJSU, I remember the poor souls who inhabited those halfway houses. The neighborhoods were an uneasy mix of students, zoned-out halfway house residents, and long-term home owners who probably wondered what else the city would allow to set up shop in their once-vibrant neightborhood. 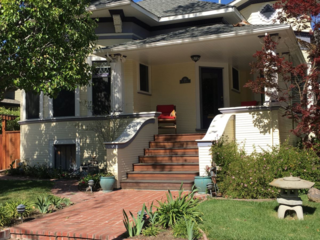 Passing 11th St., I leave the university world behind in favor of stately, well-maintained Victorians and other 19th century homes with sweeping porches as I roll across 14th toward 24th St. and the bridge over Coyote Creek. Midweek in the afternoon, the streets are quiet, with an occasional gardener mowing a lawn. The scent from the blooming flowers and vines enjoying the bright sunlight wafts in the slight breeze.

This section of E. San Antonio St. is worlds away from the traffic downtown, and from the place I'm headed, Eastside San José. 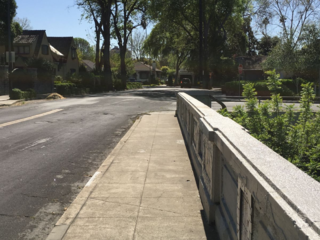 I roll to the bridge that crosses Coyote Creek and stop to watch the slow current beneath the bridge, well below the street level. The bridge, built in 1928, is painted white with tiled insets which seem a little worse for wear.

As I continue my easterly trek, I come to an overcrossing at Highway 101. This neighborhood is a mix of residential, commercial, and the little industrial that the city hasn’t been able to scare away. I gear down to take on the steep overcrossing in the narrow bike lane. An occasional car sped by me as I pushed my way to the top -- what a grind!

Hills to the east

Spread out ahead of me are the Diablo Mountains, spring green from the recent El Niño rains. They’re still a couple of miles away, but are the Eastside's foremost feature. I once read something about Chicago: That it was a city in which even the poorest neighborhoods had views of Lake Michigan. I would alter that sentiment for San José: Even the poorest neighborhoods have a view of the mountains.

As I continue toward King Rd., E. San Antonio St. becomes wider to two lanes in each direction and the bike lane, narrower. Traffic speeds up, too. By this time, I see a green directional sign pointing me to the Highway 680 bike and pedestrian overcrossing sign to the right on South Sunset Ave. I decide to turn.

The road bends to the right and the car traffic stops cold. School is getting out and the academy up ahead has dozens of cars blocking the road as the occupants attempt to pick up their children. The road is packed, but everyone seems content to wait their turn to get into the school's driveway. I get behind a car and wait for it to move. There are guards with flags to control the flow of traffic. I wait my turn then ride through the intersection thanking the guard.

Two blocks later I come to the cork-screw entrance of the Highway 680 overcrossing. It, like the overcrossing at Highway 101, is steep but unlike the other crossing, is chock-full of kids walking home from their day of structured activity. I decide I've done enough riding east, so I turn around and weave my way back to E. San Antonio St. and home.