Volunteering: As Easy as Riding a Bike!

If the 2016 election has taught us anything at all, it was a lesson that change starts in your own community. Affecting positive change can be fun, it gets you out into the world around you and doesn't need to be expensive.

Giving back to your community is a way to give thanks; volunteering your time is also as valuable as giving money to support a charity or organization. It's as good as receiving!

According to a 2013 study by United Health Group, it's good for you

Here are three ways people gave back in 2016. Join them in 2017. If these don't appeal, how about taking a look at the needs in your own community and spend a few hours volunteering?

Another way to give back is to be involved with a charity bike ride, either as a volunteer or participant. There are many charity bike events with rides that are as long as 125 miles or as short as 10, and offer the chance to give back in the form of fundraising.

For example, the Leukemia and Lymphoma Society offers a program, Team in Training, that combines coaching, training and fundraising mentoring.

Participants learn how to do a century ride comfortably through training rides and information on proper nutrition and hydration.

At the end of the training, newly fit participants experience a ride in a really special setting. Locally, Team in Training fields a group of people who ride America's Most Beautiful Bike Ride -- Lake Tahoe, a 72 mile bike ride around the lake.

Donating Food for the Hungry

At this time of year feeding the hungry comes to the forefront. The Thanksgiving holiday, while it reminds us to be thankful for what we have, it also reminds us that there are many folks who aren't as fortunate and could use a little help. 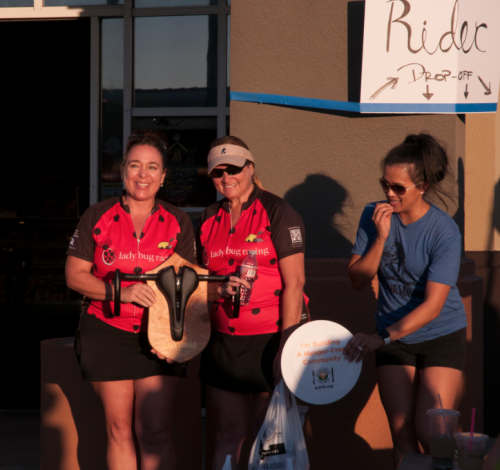 Erin Dorcy saw this need and brought Cranksgiving to San Jose at the beginning of November. This first-time event donated enough food to Second Harvest Food Bank for 700 meals.

Cranksgiving itself is an alley cat-style urban race/scavenger hunt. The participants scored points by bringing in pounds of food on their bike or by riding very fast carrying food they bought to get through the course. They also received points based on a few tasks they had to complete while racing from store to store, picking up food to donate to Second Harvest.

Erin plans to organize a Cranksgiving San Jose next year. Keep tabs on the progress at CranksgivingSanJose.wordpress.com

Another event involving bikes in San Jose is Turning Wheels for Kids. Every year on the first weekend in December, the program has its Big Bike Build that takes place at the McEnery Convention Center in downtown San Jose. As big as this event's name implies, hundreds of organizations and their members get together and build up bikes that will be given to children in need throughout the next year. The bikes, which range in size from tiny to almost adult-sized, are built up in a single day -- all 2,500 of them! 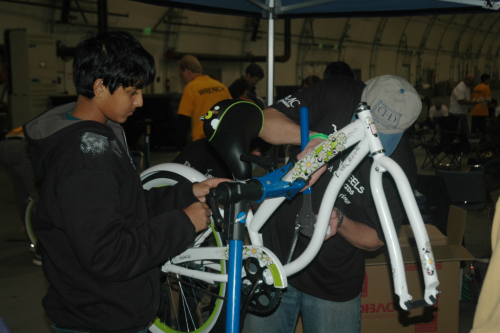 The mission of Turning Wheels for Kids is to distribute bikes at the holidays and year around through its partnerships with Santa Clara Valley Medical Center’s VMC Foundation and Bay Area Women’s Sports Initiative, both organizations with the mission to encourage outdoor activity.

While this year's Big Bike Build is over, Turning Wheels for Kids accepts financial donations all year around. And, the beauty of this project is that 100 percent of the money goes to purchase bikes.

Whatever you plan on doing with your volunteer time, make 2017 your best year ever -- because giving is as good as receiving!

Thank you, Susan, for letting us know about Ride for a Reason. There are so many of them... it's hard to keep track. Happy Holidays!

And for those of you concerned about Oakland's public school funding, please consider RIDE FOR A REASON on April 29: http://rideforareason.weebly.com/

This is only a preview. Your comment has not yet been posted.

The letters and numbers you entered did not match the image. Please try again.

As a final step before posting your comment, enter the letters and numbers you see in the image below. This prevents automated programs from posting comments.

Having trouble reading this image? View an alternate.

Comments are moderated, and will not appear until the author has approved them.

(Name and email address are required. Email address will not be displayed with the comment.)